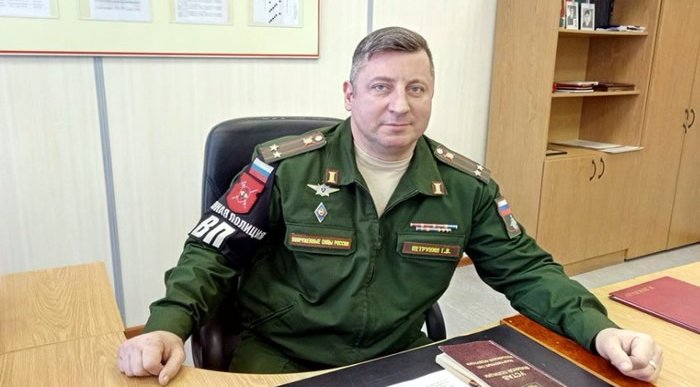 According to reports from Ukraine today, Monday, April 4, 48-year-old Lt-Colonel Georgy Petrunin has become the latest of Putin’s military chiefs to be killed in the ongoing conflict. He was the chief of military police in Samara, coming from a Russian Cossack family stretching back eight generations.

It has not been confirmed whereabouts in Ukraine Petrunin was killed, but his funeral is due to be held in the city of Volgograd tomorrow, Tuesday 5, it is believed.

This latest death adds to the massive number of high-ranking military officers who have been killed in Ukraine, something normally unheard of in any conflict.

Reports sat that Petrunin’s two sons aged 27 and 18 are also involved in the Russian military. The eldest works in military intelligence, while the other is still a cadet. This senior chief was a veteran who had seen action in both Chechnya and Syria previously.

Speaking earlier today, a Western official said, “According to our defence intelligence, Russia is redeploying elements of forces in Georgia to reinforce the invasion of Ukraine. We don’t think this was planned, it’s a very odd thing for the Russian military to do, so we expect it’s indicative of the problems they’re having in Ukraine”.

“They’ve done the biannual draftm but Putin has signed over 130,000 new conscripts into the army. The timing aligns with previous spring drafts but we think that’s an unusually high number”, they continued.

Adding, “We do think there is a realistic possibility these conscripts will be sent to Ukraine, even though the Russian MoD has said only professional soldiers will go to Ukraine”, as reported by standard.co.uk.