Longest suspension bridge in the world joins Asia to Europe 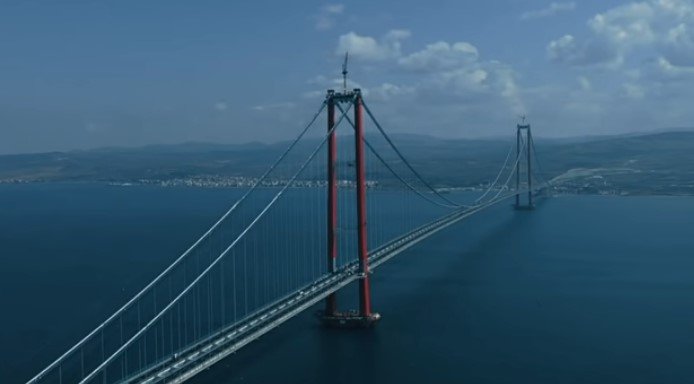 Europe and Asia is now connected by the longest suspension bridge in the world. Inaugurated on March 18, 2022, by Recep Tayyip Erdogan, the president of Turkey, the 1915 Canakkale bridge is a staggering 2,023 metres in length, spanning the Dardanelles strait, It replaces the Akashi Kaikyo Bridge in Japan, which was previously the longest bridge.

Its length of 2.023 in no coincidence, as next year, Turkey will celebrate the first centenary of the country’s proclamation of its independence. The 1915 name is also a reference to the year that the Turks fought the Battle of Gallipoli in this very environment.

Aside from all its symbology, it measures a total of 4.6 kilometres, and its towers reach 318 metres in height. That is equivalent to the height of New York’s Chrysler Building. This viaduct is part of another larger project of 89 kilometres, which also includes a motorway.

In addition to the bridge, two access viaducts, 43 overpasses, 40 underpasses, as well as other maintenance services, operations centres and parking, will be incorporated. The structure is part of the 324-kilometre section of the recurring Kinali-Tekirdag-Canakkale-Savastepe route.

Those who want to cross this impressive bridge will have to pay a toll of €12.2. It is not cheap, but will greatly facilitate the connection between Anatolia and Gallipoli, which, until now, could only be done by ferry and a one-hour journey.

With the creation of this bridge, changing continents is now only a six-minute drive. According to the Xinhua agency, €2,500 million have been invested in its construction, which was carried out by a series of Turkish and South Korean companies.

This record-breaking bridge will save an estimated total of e415 million per year in fuel costs, along with the subsequent reduction of polluting emissions, as reported by 20minutos.es.