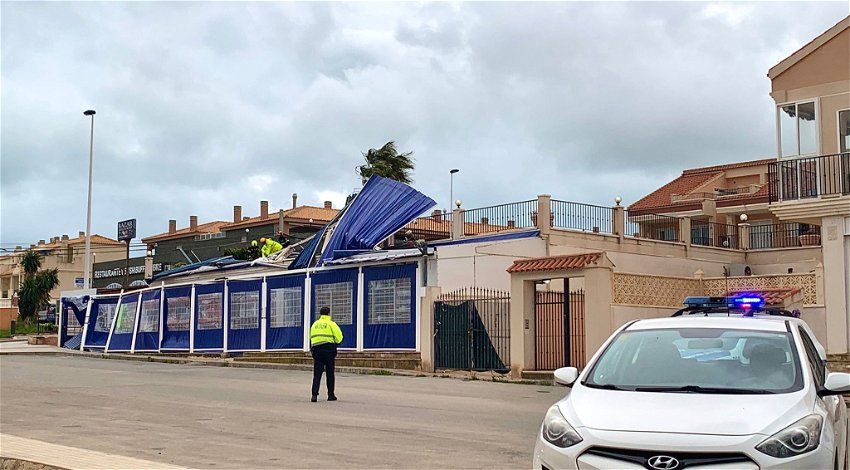 AN orange weather warning is in place for Alicante on Monday, April 4 as strong winds batter Southern Costa Blanca and wreak havoc in the popular British hotspot of Gran Alacant.

According to Spain’s State Meteorological Agency (AEMET), winds are expected to blow from the northeast, with a strength of force 7, or even 8, which could create waves of up to four metres in height.

Maximum winds speeds could reach up to 70km/h as shops and buildings feel the full force of the strong gusts.

In Gran Alacant, the Bazar located at the top of ‘Cardiac Hill’ had its entire roof ripped off on the morning of April 4 as two police cars attended the scene to keep the public safe.

The incident, which happened during the ‘school run’ – one of the busiest times of the day for traffic in the coastal town, meant significant queues formed as police directed traffic and stopped people from using the car park situated outside the Bazar, located near popular bars and cafes.

Maintenance workers desperately tried to reattach the plastic roof as the front panels began to collapse around the market, which sells everything from garden furniture to suncream and sunglasses.

The orange weather warning for coastal phenomena is in place until midnight on April 4, while yellow alerts are also in place due to the strength of the winds.

A tweet from the AEMET in Valencia noted that the “storm on April 4 will get worse in Alicante, especially in the south.”

The weather agency said that “from midday, there will be very heavy seas and the height of the waves will range between four and five metres.

“An orange weather warning has been activated due to the maritime storm in the south of Alicante. Wind and waves will be at their highest at 5 pm on April 4,” the tweet concluded.