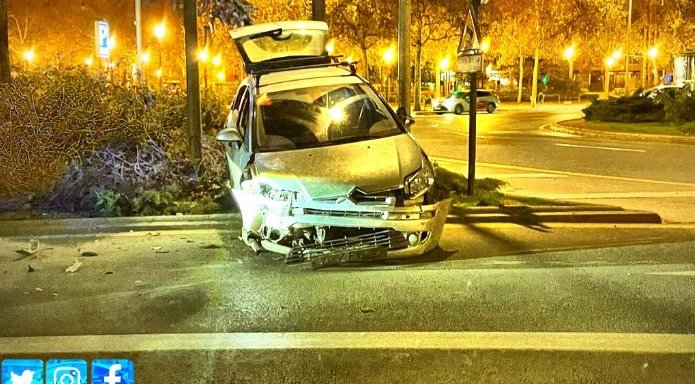 Drunk driver in Granada crashes his car and tries to flee on foot. image: [email protected]

As reported by the Local Police of the city of Granada, a drunk driver suffered an accident last February 7, which happened again last Sunday evening, April 3.

On its official Twitter profile, the force detailed how the man had careered off the road, after crashing at one of the roundabout exits located in Plaza Rotary, next to the Palacio de Congresos.

The incident occurred at around 4am on Sunday. After crashing his vehicle, the driver and his passengers fled the scene on foot. However, after a quick search of the vicinity, they were intercepted by the police.

According to local police sources, as told to granadadigital.es, the driver was subjected to a breathalyser test. He recorded a result that exceeded the legally allowed alcohol limit of 0.25 milligrams per litre of exhaled air. For this, he will appear in court for a crime against road safety.

The manoeuvre to recover the vehicle was very complicated, due to the position in which it was found, lodged between several trees and lampposts. Eventually, the car was removed by a towtruck at approximately 8am that same morning.

Last February, a similar incident happened where the same driver was able to flee the scene of the accident without being discovered. This time, as the Local Police commented on their Twitter page, “he was not so lucky” and they complete the publication with the hashtag “#Karma”, as reported by granadadigital.es.