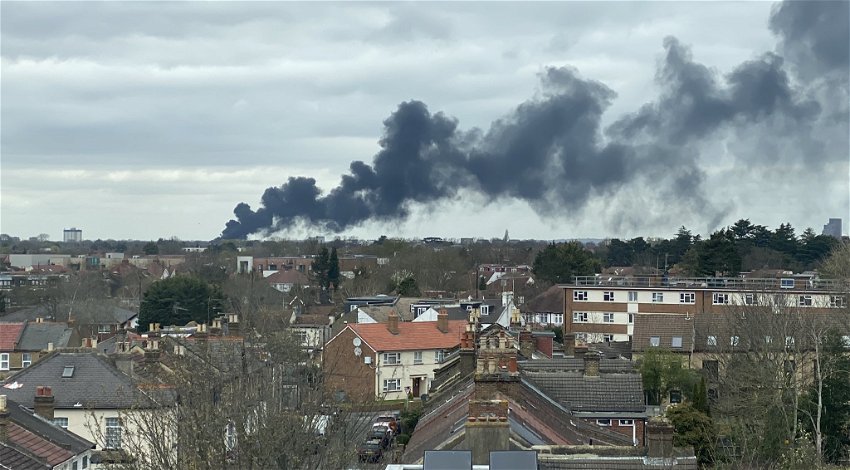 THE huge fire that was visible from Heathrow Airport – that further added to travel chaos at the airport – is now under control, according to a statement from the London Fire Brigade

The garage fire in Southall on Tuesday, April 5  is now under control,’ the statement read.

“Firefighters will remain on scene damping down.”

The fire was visible from Hayes, Hounslow and Heathrow, with videos posted to social media showing black clouds of smoke billowing from the area.

The statement continued: “Most of a single-storey commercial garage, an adjoining storage area and several cars were alight. A container of oil was also alight. Around 30 people were evacuated from neighbouring properties. There are currently no reports of any injuries.

“Three cylinders were removed from the building before the Brigade arrived and firefighters cooled them to an ambient temperature as some cylinders can explode when exposed to heat. A 25-metre cordon was in place as a precaution.

“The Brigade’s 999 Control Officers took over 40 calls to the blaze.”

Station Commander Graeme Hunter, who was at the scene, said: “The fire produced heavy smoke, which was visible for miles. We urged residents in the area to close their windows and doors.

“There is some disruption to traffic, so we encourage people to avoid the area whilst crews continue to work to make the scene safe.”

The garage fire in #Southall is now under control but firefighters will remain on scene damping down. Our 999 Control Officers took over 40 calls to the blaze. There are currently no reports of any injuries https://t.co/LNF7oBjIwT pic.twitter.com/bno0tDu7GI

According to the statement at the time, fire crews from Southall, Hayes, Feltham, Heathrow and surrounding fire stations were called to the scene at around 11.45 am (local time).

“The cause of the fire is not known at this time,” the statement read.

Users on Twitter had noted that the smoke can be seen in Windsor on the M4 and Battersea.

There is a massive fire in Southall right now visible from Hayes, Hounslow, and even Heathrow pic.twitter.com/eIrDdUV6DA

The fire near the UK’s biggest airport comes after staff shortages at both airlines and airports have caused travel chaos at many of Britain’s top airports including Heathrow and Manchester.

In fact, air travel has been significantly rocked over the last few days after hundreds of passengers were left stranded over the weekend following an excess of 200 flights being cancelled.

The cancellations, which are set to continue through the week, were reportedly down to staff illness, according to EasyJet, who cancelled more than 60 flights on Monday, April 4.

An EasyJet spokesperson said at the time: “As a result of the current high rates of COVID infections across Europe, like all businesses EasyJet is experiencing higher than usual levels of employee sickness.

“We have taken action to mitigate this through the rostering of additional standby crew this weekend, however, with the current levels of sickness, we have also decided to make some cancellations in advance which were focused on consolidating flights where we have multiple frequencies so customers have more options to rebook their travel, often on the same day.

“Unfortunately it has been necessary to make some additional cancellations for today (Sunday) and tomorrow (Monday). We are sorry for any inconvenience this may cause to customers on affected flights.”

On Tuesday, April 5, British Airways have reportedly dropped at least 98 flights to or from Heathrow, as reported by GB News.

Paul Charles, chief executive of travel consultancy The PC Agency, said: “This is a staggering level of flight cancellations caused by a cocktail of not having enough staff in place and Covid-induced staff shortages.

“Airlines are certainly seeing a high level of demand to fly, but are simply unable to cope with that demand due to a lack of resources.

“It’s a nightmare situation for airlines and airports at the moment.”