Happiness machines in Downing Street, are they serious? 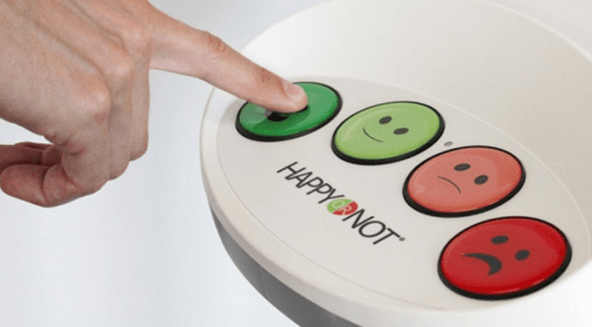 Happiness machines in Downing Street, are they serious?

Staff working in Downing Street have complained of being patronised after happiness machines were installed to monitor how aides are feeling, prompting some to ask “are they serious”.

The machines, similar to those you see every day in airports and service stations around the world, have according to the Times been places around Downing Street. The machines with their great big coloured buttons allow staff to say whether they have had a good or a bad experience at work each day.

The people working in Downing Street are however said to be incensed with the move saying that it is patronising, and at a time when there is uncertainty over their future following the partygate investigations and a wider shake-up that is likely to follow.

Staff spoke to by the Times have said: “It’s treating people like idiots rather than professionals trying to do a job that can be very difficult and stressful at times.”

Another added: “It is a totally miserable place to work and if they need happiness machines to tell them that then it shows how out of touch they are.”

The unhappiness of staff over the installation of the machines was commented on by Dave Penman, General Secretary of the FDA union, which represents civil servants. He said: “Smiley-face touch screens… have no place in a modern working environment with senior public service professionals.”

To make matters worse there is also said to be a new ‘Building Hurray’s’ intranet page where staff members can complement each other on their work and to do so anonymously.

Permanent Secretary Samantha Jones, who has already faced fierce criticism over attempts to slim down operations, is believed to be behind the controversial moves. One of her proposals is to move dozens of staff from Downing Street to the Cabinet Office, a suggestion that has not gone down well with staff.

Wading into the debate on Twitter, she said: “The introduction of happiness machines is a perfect example of where No 10 now is: the most contemptible aspects of HR culture combined with the collapse of leadership and a vacuum of moral courage among senior figures.”

The introduction of Happiness machines in Downing Street, will not endear the permanent secretary to her colleagues with one saying that “happiness machines with smiley faces belong in toilets not in serious working spaces.”