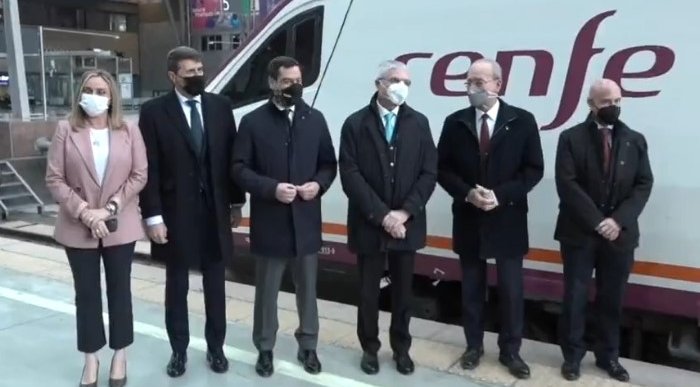 Renfe launches its inaugural train service between Malaga and Granada

This Monday, April 4, saw Renfe launch its first train service that joins two Andalucian capitals, as the connection between Malaga and Granada was inaugurated. An Avant train will cover the distance in just one hour and ten minutes, with a single stop planned in the Granada province town of Loja.

The new service will have four departures. At 9:25am and 8:25pm two will depart from the Maria Zambrano station on the Costa del Sol. The other will depart at 7.40am and 6.50pm from Granada.

Renfe’s Avant trains are slower than its AVE service, but still connect the two cities 15 minutes quicker than driving by car. They travel on the high-speed line, so they run faster than the conventional ones.

When it comes into service, all the trains will have an intermediate stop in Loja. Eventually, they will also do so at the new Antequera Alta Velocidad station.

Juanma Moreno, the president of the Andalucian government was a passenger on this inaugural trip. He was accompanied by – among other dignitaries – Francisco de la Torre, the mayor of Malaga.

With 150 passengers on board, not counting authorities or the press, the train arrived in Granada at 10:38am. Since tickets went on sale on March 18, Renfe reports that a very satisfactory 1,500 have already been sold.

Upon his arrival in Granada, Juanma Moreno stressed that this connection means “the union of the monumentality of Granada with the technological power of Malaga. These are two cities that have a lot to add and that are going to benefit”.

“If there is anyone happy, it is me, when I leave my responsibilities I will be one more user. I am from Malaga, and my wife is from Granada”. The Andalucian president pointed out that last year Malaga had 5.5 million tourists, and Granada 2.6 million, figures that together “many countries would like to have”.

Francisco Cuenca, the mayor of Granada, highlighted in his speech the need to deal with joint alliances with the other Andalucian capitals that have an AVE line. Their mayors will meet this Tuesday 5 to discuss this future possibility, as reported by malagahoy.es.