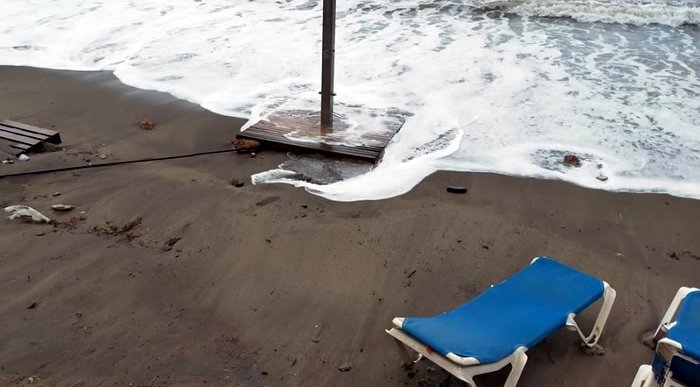 Costa del Sol beaches are in a ‘catastrophic’ state warns Aehcos, the Association of Hotel Businessmen

With Easter fast approaching, the hoteliers of Malaga province expressed their concern this Tuesday, April 5, about the terrible state of its beaches. After the near-continuous storms of recent weeks, the beaches of the Costa del Sol are in very bad condition.

Jose Luque, the president of Aehcos, the Association of Hotel Businessmen of the Costa del Sol, pointed out, “April is a very important month for tourism due to a unique tandem of attractions: Easter and the start of the beach season”. He expressed his fear for the beaches claiming the storms “have left the coast in a catastrophic situation”.

Bookings are reportedly quite high already at the start of April. Malaga leads the way with 72.4 per cent occupancy, followed by Benalmadena with 70.4 per cent. Marbella is at 69.7 per cent, Nerja 67.8 per cent, and Torremolinos has 67.5 per cent.

As the executive committee of Aehcos highlighted, this data is “moderately optimistic”, since there are still areas with “certain occupancy problems”. That was a reference to the normal influx of reservations through tour operators, but, who are “still uncertain of the situation with the armed conflict”.

Although occupancy is still nowhere near pre-pandemic levels, this latest data does seem to suggest a steady gradual return of international visitors. Aehcos reported that March closed with 57.76 per cent occupancy, compared to 69.6 in 2019.

The one positive of this percentage is that 65 per cent was tourists, while the other 35 per cent were national. “This is a very significant figure for us after two years with a large drop in international tourism. Even so, the Russia-Ukraine war has been clearly noted, which has slowed down the rate of reservations during March”, explained Mr Luque.

Malaga was the most popular destination in March, recording 74.4 per cent occupancy. Next came Antequera with 67.2 per cent, Nerja 64.6 per cet, and Marbella 60.8 per cent.

In the coastal municipalities, supposedly lower due to their dependence on tour operators, Mijas saw 43.8 per cent, Benalmadena 56.3 per cent, and Fuengirola 59.1 per cent. According to Aehcos, these are not the ‘desired levels’.

An average occupancy of 53.6 per cent was achieved in the first quarter of 2022. This is a great improvement compared to the same period of 2021, which was only 17 per cent. 2019 saw an average of 62.9 per cent, which was of course before the pandemic, as reported by laopiniondemalaga.es.