Extremes of the human spirit 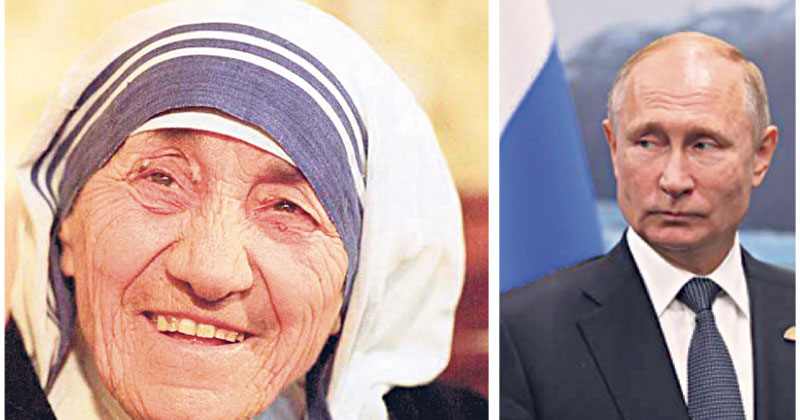 Mother Teresa and Putin are both members of the human race.

WE have seen numerous cases where the perpetrator of a heinous crime against another human shows no remorse – for murder, torture, life-changing bodily harm or robbery of life savings. Are these people incapable of imagining how they would have felt if they had been the victim?

What defines us as a good or bad person is determined, more than anything, by our perception of others. If we follow the simple Christian principle of ‘love thy neighbour’, we would not inflict harm on others. If we understood that we are all connected, how could we hurt or humiliate them? How could we fail to feel their pain and their distress as our own when they suffer?

A majority of humanity is good rather than bad. The ‘good’ may be lazy, inconsiderate or intolerant but, if also generous and law-abiding, not bad people. Meanwhile, the ‘bad’ may have some virtues such as diligence, courage, and care for their family. But they could also be selfish, arrogant or cruel to strangers and animals and are therefore not good people. Most of us are near the dividing line, 45-55 per cent of the extremes.

On the subject of extremes, one main difference between the genocidal Hitler and Stalin is that Hitler destroyed and murdered beyond his national borders whereas victims beyond Stalin’s borders were ‘merely’ subjugated – unless they rebelled. The distinction between Putin and Kim Jong-un is also defined by national borders. The terrible crimes of Kim are, as I write, confined within his borders.

On a brighter note, let’s look at Mother Teresa, who devoted her life to helping the poor. This Albanian woman moved to India, a totally alien environment, to care for some of the most deprived people on Earth. Risking disease in the slums of Calcutta, she comforted and provided the best she and her sisters could for thousands of desperately sick and needy people. For her it was not a sacrifice so much as a commitment. She is an extreme example of millions who make personal sacrifices for the betterment of their fellow humans.

The Europeans who welcomed refugees from Syria into their homes and are now accommodating Ukrainians are an inspiration. It is a huge commitment to share your home, your lifestyle and your assets with total strangers. Those who risk their lives for others and those who support charities with more than they can afford, often anonymously, are good people.

Whoever threatened to slit the throat of Lelde Vasa, the Latvian owner of a Russian sauna in Wolverhampton, just because she has Russian clients, must be a racist looking for any excuse for violence against anybody not like him. It would probably be the same if Leide were Ukrainian or black. But even this cannot compare with the relentless slaughter unleashed by Putin in Ukraine.

Mother Teresa and Putin are extreme members of the human race.