Up for grabs: Maradona´s ´Hand of God´ shirt to sell for £4 million at auction 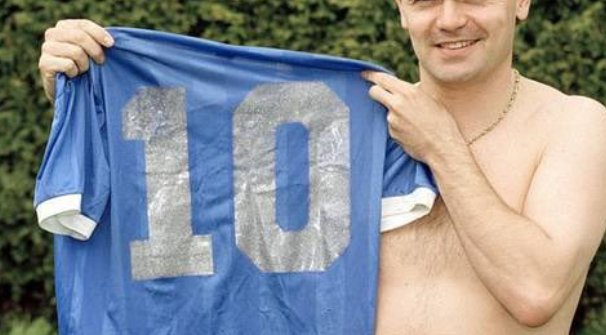 Former England midfielder Steve Hodge looks set to earn more than £4 million at auction for the shirt he swapped with Diego Maradona after the famous “Hand Of God” 1986 World Cup game in Mexico.

Hodge, 59, has been the shirt’s “proud owner” ever since. Following Maradona’s death in 2020 Hodge resisted offers to buy the shirt but has now had a change of mind.

The number 10 emblazoned Argentina strip will be sold by Sotheby’s at an online auction opening on April 20, the Times reported on Wednesday, April 6.

It is currently on display at the auction house’s London offices and is expected to sell for more than £4 million.

Hodge said: “The Hand of God shirt has deep cultural meaning to the football world, the people of Argentina and the people of England and I’m certain that the new owner will have immense pride in owning the world’s most iconic football shirt.”

The 1986 World Cup quarter final in Mexico City remains one of the most memorable – and controversial – matches in football’s history.

Maradona scored Argentina’s first goal when he illegally knocked the ball past England’s goalkeeper, Peter Shilton, with his hand.

Brahm Wachter, Sotheby’s head of streetwear and modern collectables, said there were very few sporting items that could jusify such a high estimate.

He added: “The moment resonated far beyond the world of football, coming soon after the Falklands conflict, and has, in turn, inspired books, films, and documentaries.

“It is a piece of one of the greatest moments in football history. The two moments balance each other in a beautiful way. There is the Hand of God, when he knew exactly what he had done and told his teammates, ‘Come hug me or they won’t allow it’. And right after that, he scores the goal of the century.”

He said that the backstory of the strip added to its aura. On the eve of the 1986 match Carlos Bilardo, Argentina’s manager, decided that the cotton shirts the team had been wearing would be too heavy in the Mexico City heat and the team went shopping for new tops.

The Argentina team strips were bought at the last minute after it was decided the cotton ones the team had been wearing were too heavy in the Mexico City heat .

There had been two options and Maradona pointed at one and said: “That one. We’ll beat England in that one.”

There have been calls for the shirt to be donated to Argentina.

Twitter user shanejosephluke said: “It should be given to Diego’s family or the Argie state, would be a nice touch of class”.