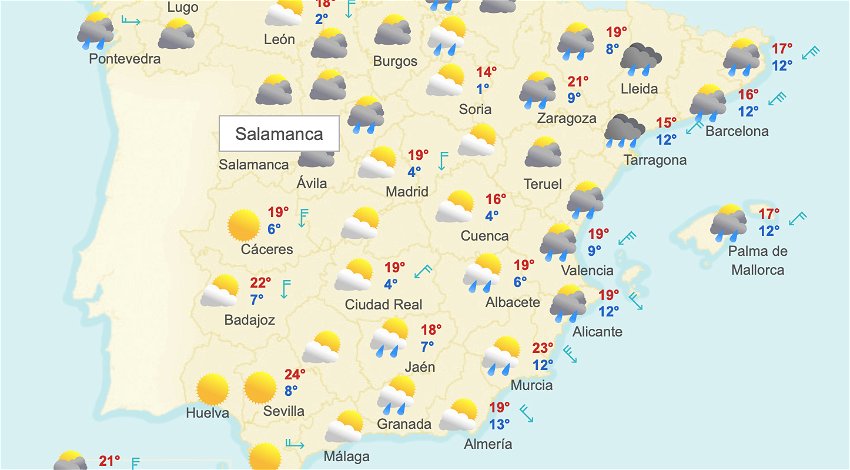 The crazy weather Spain is expected to experience over the Easter period will see a wide variety of weather, with rainfall, thunderstorms and high temperatures predicted.

According to the State Meteorological Agency (AEMET) and meteorologist José Antonio Maldonado from Meteored, Easter will see incredibly varied weather patterns. Here is a day-by-day breakdown of what you can expect over the next weeks.

The arrival of an Atlantic front on Friday 8 April, will cause light to moderate Galicia and the Cantabrian regions. The rains will gradually spread to Castilla y León and the Pyrenees. The rest of Spain will see clear skies with frosts only occurring in mountainous areas. The Mediterranean coast is expected to see a rise in temperatures.Saturday will see similar weather to Friday with temperatures rising across the country.

On Sunday 10, April, another Atlantic front will arrive in the Iberian Peninsula causing increased chances of rainfall in Galicia, Catalonia, Valencia and the north of the Canary Islands. The rest of Spain will see partially cloudy skies as well as a rise in temperatures.

The front that will approach the Peninsula on Sunday will move across the country from east to west throughout Easter Monday. Rainfall will affect areas near the Atlantic coast but will be unlikely in the south of the Mediterranean. Temperatures are expected to drop after the front passes through.

Tuesday 12, April will see the arrival of  a second front, marked by unpredictable weather and  widespread precipitation. There will be snowfall at high altitudes and temperatures will continue to drop.

Wednesday 13, April will see unpredictable weather in the North of the country, especially in Catalonia, and also in the east of Andalusia and the Balearic Islands. Temperatures are expected to rise following several days of low temperatures.

On Maundy Thursday, there should be little to no rainfall in the North of Spain. The rest of the country will see a day marked by clear or scarcely cloudy skies. During the day, temperatures will rise again, and most of the interior of the peninsula will be around 20 degrees or above. On the coast, temperatures will be slightly lower.

The Easter weekend is predicted to be marked by its good weather, with sunny skies and warm temperatures, with maximum temperatures of 25 degrees in some areas of Spain.