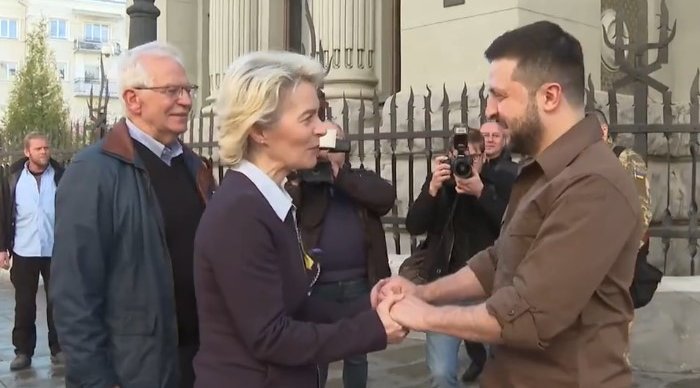 Ursula von der Leyen, the president of the European Commission, and Josep Borrell, the head of European diplomacy, arrived in Ukraine today, Friday, April 8. They were fully armed with the latest round of sanctions against Russia. Eduard Heger, the Prime Minister of Slovenia also travelled with them.

Accompanied by Ukrainian Prime Minister, Denys Shmyhal, they also visited the city of Bucha, on the outskirts of Kyiv. This city is the location of an alleged horrific massacre of civilians by Russian forces. “It was important to start the visit in Bucha because in Bucha our humanity has been shattered”, declared Borrell, standing in front of several corpses wrapped in black plastic bags.

“We have witnessed heartbreaking images of destruction, atrocities committed by Russia, and the unspeakable price paid by the innocent Ukrainian people”, stressed Borrell. He stressed that Russia’s alleged war crimes in Bucha and other places will be investigated and prosecuted.

The head of European diplomacy also announced the launch of another project, with an investment of €7.5 million, to collect data on missing persons.

Yesterday, Thursday 7, Charles Michel, the President of the European Council, announced the plan to increase spending in Ukraine from 1,000 to €1.5 billion. This still needs to be confirmed by the 27 member states. It will enable the Ukrainian military to have more weapons, something that is seen as vital by both the EU, and the Ukrainian leader.

Borrell reiterated his statement from earlier this week that Zelenskyy needs “less applause and more weapons, because good words are fine, but in the end what they need is more resources, and more military capacity to resist Russia’s aggression”.

He also made an observation that from his visit in person to Ukraine today, he saw signs that “Ukraine controls its territory” and with a government at the helm. Showing even greater solidarity with Kyiv, it was announced during their visit that the European delegation office will reopen in the Ukrainian capital

“The EU returns to Kyiv”, Said Borrell, adding, “I mean it literally: our head of delegation has returned to Kyiv, so that we can work together even more directly and closely”, as reported by elperidoico.es.