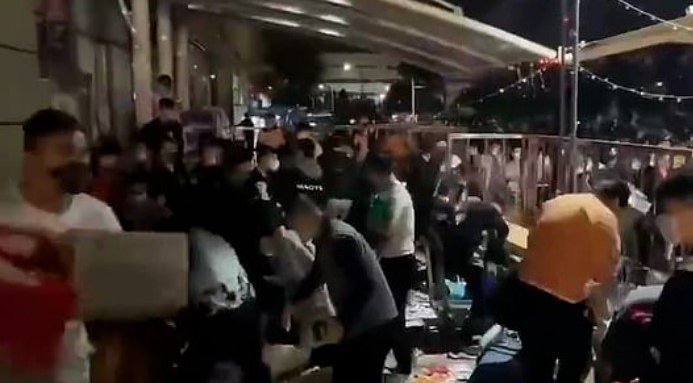 With Shanghai residents so far enduring more than three weeks of the Chinese government’s Zero Covid lockdown it would appear that they are pretty desperate. Videos uploaded onto the state-censored Weibo social media platform showed looting allegedly taking place in food stores in the Jiuting neighbourhood of the city, with people fighting over food supplies.

This footage was quickly removed, but not before receiving thousands of comments and re-shares from users. Crowds could be seen smashing through barriers that had been erected by the authorities. One comment simply read, ‘Where did the supplies go? We need them’. Another tweeted,  ‘The cause of the incident was that we wanted supplies’.

Another Weibo user called ‘Rodes’, who had posted a video showing the incidents that were taking place, claimed to have been instructed by the platform to remove his video. He wrote, ‘Deleted it’.

Jared T. Nelson, a compliance lawyer living in Shanghai, was among those tweeting. He explained how the strict rules operate. Only two people from each building are allowed to go outside to collect the food parcels. Each person has just two hours to complete their task, and must wear full protective white suits.

Speaking about the ‘quarantine centres’ where infected residents are taken, Mr Nelson said he has been informed the conditions were ‘awful’. ‘No showers, portable toilets only, no hot water, and of course no privacy’, he tweeted.

He added that the food deliveries are frequently cancelled, depending on which part of the city you lived in, because of the shortage of supplies. ‘My family had three deliveries that were booked to deliver today: two group purchases of meat/seafood + one individual purchase of soap and shampoo. All three were cancelled’, he posted.

‘The situation in Shanghai is scary’, wrote Michael Smith, the North Asia correspondent for the Australian Financial Review. ‘Reports of millions struggling to feed themselves, elderly unable to access medicine, videos of small riots breaking out circulating on social media. Many households relying on inadequate govt food deliveries’.

According to official statistics, on Friday 8, Shanghai recorded a record number of 23,600 new Covid cases. This is quite possibly a lower figure than the actual rate, in what is China’s largest city, with a population of around 26 million inhabitants.

Citizens in Changzhou are destroying COVID barriers put up by the government. pic.twitter.com/ws4yL4sVDC

The level of unrest in Shanghai presently… Note that at no point in Hong Kong, including during the extradition bill protests and 5th coronavirus wave, has there been any looting of this kind taking place. https://t.co/yZwFMAzAmi