WATCH: Semi-naked man arrested for clinging onto a moving van in Madrid 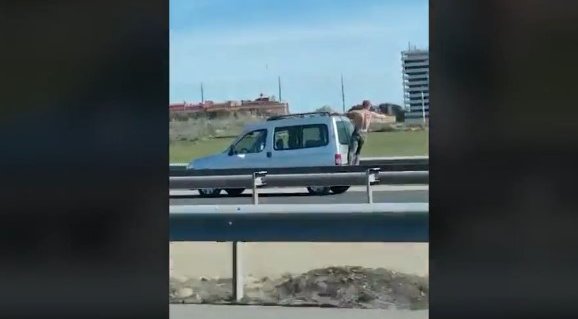 As reported in a press release, Guardia Civil officers, on Thursday, April 7, arrested the driver of a van that was circulating on the A-5 motorway in Madrid, carrying a semi-naked man on the outside of it.

This bizarre incident occurred at around 5:15pm. The vehicle was traveling along the A-5 between the Community of Madrid municipalities of Navalcarnero and Mostoles . A man was on the roof of the van, and then he was seen adopting a variety of positions on the outside of the vehicle, over a 12km distance.

This clearly put other road users at risk, and also his own wellbeing. His crazy antics of him, combined with his state of undress of him, created an added danger given the large number of drivers on this busy section of the road who could easily be distracted.

This latter point was proved by the number of drivers who recorded the incident and uploaded it on social media platforms that same afternoon.

Later on Thursday afternoon, the 39-year-old driver was arrested by the Guardia Civil for reckless driving. He was also reported for driving while using a mobile phone, and for transporting people in a vehicle in a location other than the one intended for them.

The passenger outside the vehicle, a 39-year-old man, was arrested by Guardia Civil officers on Friday 8.  He was charged with an offence against road safety, by creating a serious risk for road users, and reported for not maintaining the proper position in the vehicle. Both driver and passenger have a previous police record for various offences.