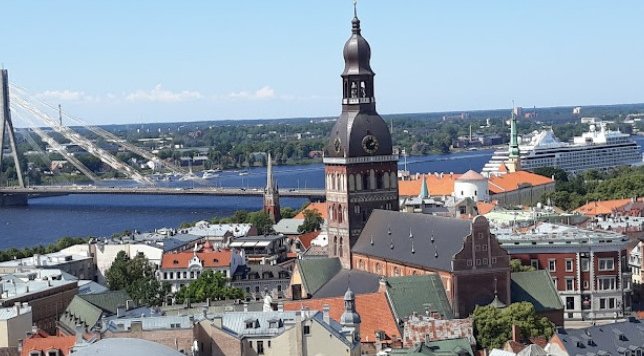 Latvian government accused of being ‘Neo-Nazi’ by Moscow

Vladimir Putin has today, Sunday, April 11, turned his attention to the former Soviet territory of Latvia. This Baltic republic shares a border with Russia, and according to the Daily Mail, Moscow has accused the Latvian government of being ‘Neo-Nazi’.

A decision has been approved in Riga to commemorate Ukraine’s war victims next May 9. This will take place on the exact same date as Russia’s ‘Victory Day’ on which they commemorate Nazi Germany’s surrender in World War 2. Moscow has called this “blasphemous”.

On this date, the flags of Latvia and Ukraine will be flown together at all residences and government buildings. Parliamentarians in Riga said their action was being taken to draw attention to “Russian military aggression”.

Maria Zakharova, the Russian Foreign Ministry spokeswoman, according to Kremlin-backed media, described Latvia’s decision as “an attempt to humiliate the Russian-speaking community living in Latvia, which cherishes the memory of the exploits of the antifascist heroes”.

“The blasphemous decision of the Latvian parliamentarians is subject to strong condemnation by all sensible forces not only in Russia but throughout the world”, she continued.

Adding, “At the same time, this legislative act is not surprising, since the ruling regime in Latvia has been well known for a long time for his neo-Nazi biases and his attempts to cover up the atrocities of Nazi Germany’s henchmen”.

It should be remembered that one of the reasons put forward by the Putin regime to justify its invasion of Ukraine, more than a month and a half ago, was its intention to ‘denazify’ this country, as reported by 20minutos.es.