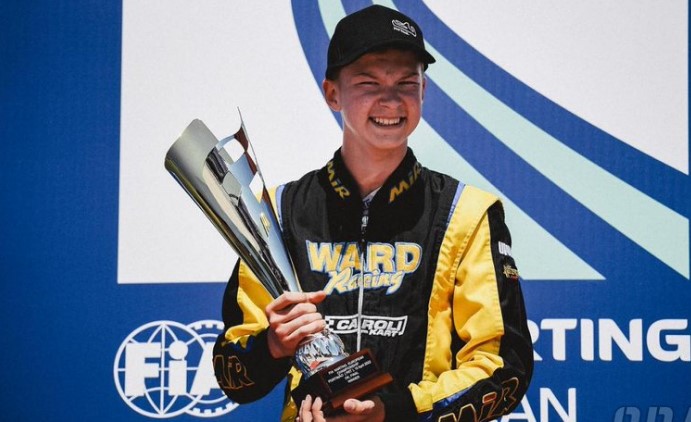 The incident occurred during the CIK-FIA European Karting Championship which was held in the town of Portimao, on Portugal’s Algarve. His team, Ward Racing, has subsequently fired him for the alleged action. He is also under investigation by the FIA, motorsport’s governing body. If found guilty, the young racer could face a ban.

As a result of the invasion of Ukraine, Russian drivers have been banned from competing under their own flags in all FIA competitions, and their national anthem can not be played during any post-race celebrations. Severiukhin drove under the flag of Italy yesterday.

As the driver took the podium, he was seen to tap on his chest and extend his right arm, in a similar gesture to the Nazi salute. He then burst out laughing following his action. The young Russian has since denied making any such gesture, claiming he was simply gesturing to his family and friends.

“I would like to address everyone about Sunday’s situation on the podium. I won the round of the European Championship and was very happy. I’m from Russia. I thanked the team and my relatives from Russia”, he said in a statement released through the Russian automobile federation.

He added, “Someone saw a bad gesture in my actions, but it’s not. I just thanked them. I am Russian, I am from Russia and I stand by my country”.

A response in a statement from the FIA said, “The Federation Internationale de l’Automobile confirms that it has launched an immediate investigation into the unacceptable conduct of Mr Artem Severiukhin that occurred during the podium ceremony for the OK category at Round One of the 2022 FIA Karting European Championship at the Kartodromo International do Algarve in Portugal”.

“The FIA will communicate shortly on the further steps that will be taken in this case”, they concluded.

Severyukhin’s contract was immediately cancelled by Sweden’s Ward Racing. A spokesperson labelled his actions “a manifestation of unsportsmanlike behaviour, an unacceptable violation of the ethical and moral sports codex”.

“Ward Racing is deeply in shame of the pilot’s behaviour which it condemns in the strongest possible terms. The actions of Artem Severyukhin during the award ceremony on April 10, 2022, were exclusively individual and do not represent the views and values of Ward Racing in any manner”, their official statement announced.

Adding, “On the contrary, Ward Racing stands with the international community condemning Russia’s invasion of Ukraine, and expresses its solidarity with the people suffering because of this unprovoked and horrific attack”, as reported by thesun.co.uk.

#Russian driver Artyom Severyukhin, competing under the Italian flag at the #European Junior Karting Championship, showed a #Nazi salute at the awards ceremony.

He competing under the #Italian flag because of the sanctions imposed on #Russia. pic.twitter.com/q4wOGHPsvR