Biggest ever collection of stuffed animals in Spain discovered in Valencia 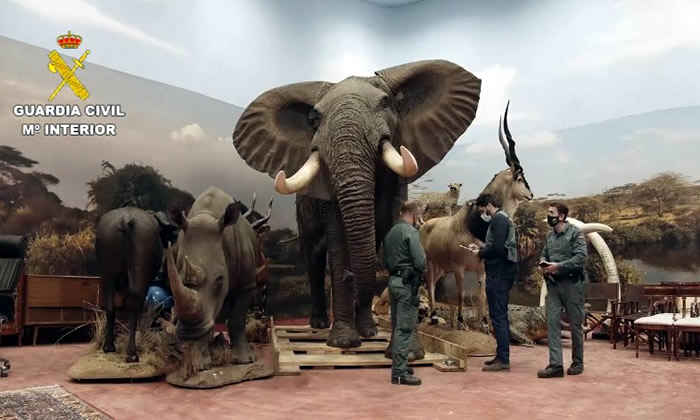 Officers of the Guardia Civil’s Nature Protection Service ( Seprona ), in the Valencian Community municipality of Betera , on Wednesday, April 6, made the largest discovery of stuffed animal specimens in Spanish history. Their operation was carried out in collaboration with EUROPOL .

During the search of a property, they uncovered a total of 1,090 pieces of taxidermy and complete stuffed animals. These items were, in some cases, already packed and prepared for smuggling to clients. The full collection has an estimated value of €29 million and is one of the biggest finds of its kind ever in Europe.

As a result, they have placed one of the sons of the well-known late Valencian businessman Francisco Ros Casares under investigation for a possible crime against flora and fauna. The accused has not been detained.

According to a press release from the force, of the specimens found, 405 belonged to CITES (Convention on International Trade in Endangered Species of Wild Fauna and Flora) . Some of them are even extinct, such as the oryx dammah, or practically extinct, such as the addax, or the Bengal tiger.

Some of the animals were in the house, but most were in a building used as a warehouse, within the huge 50,000m² plot on which both buildings stood. Among the stuffed specimens are some of immense value, such as African lions, Bengal tigers, white rhinos, and snow leopards.

There were even complete elephants and giraffes, as well as dozens of elephant tusks. In the home of the investigated, officers discovered that the businessman had a sofa and 20 chairs in the living room made from crocodile skins.

Macron and Le Pen to contest French Presidency on April 24

A report will now be carried out by the Seprona officers after making a full inventory of all the stuffed trophies and items in the property. Their final report will be used to confirm the degree of protection afforded to these species, to determine possible crimes, which will be investigated by a court in the town of Lliria.

With the advice of Ucoma, Seprona launched their investigation, and, after verifying the veracity of the information received, decided to request a court order to access the home and confiscate the specimens of protected species. The pieces remain in the warehouses, under a judicial deposit.

Most of the animals were clearly hunted on safaris in Africa , although there were also specimens of native fauna, such as deer, or wild boar, as reported by 20minutos.es .