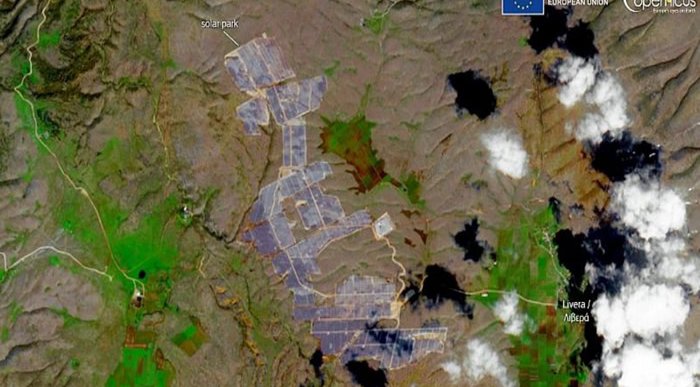 Built by Greece’s biggest oil refiner Hellenic Petroleum, in the next few weeks the new plant will connect to the national power grid. Eventually, enough electricity should be generated to provide 75,000 households with power.

As he inaugurated the park, Mr Mitsotakis said, “This project reflects our national goals for cheap and clean energy from the sun, from the wind, and from the water”. At the same time, he promised to speed up the time it takes to issue permits for renewable energy projects.

Following the conflict in Ukraine, more and more countries are looking at eliminating their dependence on Russian gas. Costly imported fossil fuels, which also create pollution, could all be things of the past as governments look at new ways of providing cleaner, and cheaper, energy.

By 2030, Greece is aiming to almost double its installed capacity from renewables to about 19 gigawatts. According to the European Union statistics office, the country has already exceeded its 2020 goal by tapping renewables for 21.7 per cent of its energy consumption.

Hellenic Petroleum hinted that it could also add battery storage to its operations. To overcome the current delays in installations and large-scale storage needs though, it says the government needs to process permissions at a faster rate and make licencing procedures much quicker.

This was something that Mr Mitsotakis assured his government was going to look into. He also promised that permits for the construction of large-scale offshore wind parks were set to be specified soon, as reported by euronews.com.