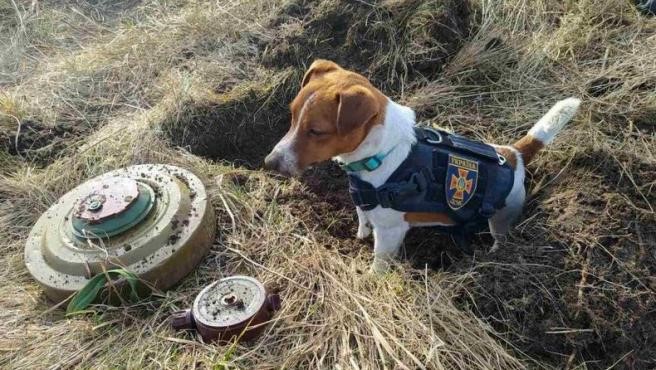 Retreating Russian forces have been accused of laying explosives and setting booby traps, however help is at hand as you meet Patrol one of the dogs that detects landmines.

Patron, a Jack Russell, is fast becoming a little hero in the war torn country as he seeks out Russian landmines. Patron has become the face of efforts to clear areas of landmines, or what the Ukrainian troops have sarcastically called “gifts from Russia that” that have been exchanged for bits of cheese.

Based in the city of Chemigov, two-year-old Patron is the star landmine seeker as well as being the mascot for the bomb disposal squad clearing the area.

Patron has risen to fame after Ukraine’s State Emergency Service (SES) shared images on social media of the little fellow going about his business.

Patron, the dog 🐕 helps to locate landmines left behind in Ukraine. https://t.co/LKuIWmj1cJ pic.twitter.com/t9m7T3Q6Ah

Ukraine are not the first to use animals to detect landmines. Dogs have been very effectively used in Southern Africa with air filters used to sniff the air in areas before being given to dogs to identify those that smell of explosives. More recently rats have been used in central Africa to detect mines, the smaller more agile animals effective at locating explosives but without setting them off.

According to the New York Post a rat was awarded a medal in Tanzania back in 2020 for his work in locating mines.

The SES bomb squads working in Ukraine have said that everyone needs to “be alert, look under your feet and do not disturb Patron.”

Since the start of the war, Patron and the SES sappers have ‘cleaned’ nearly 90 Russian landmines saving, a hero in the making.