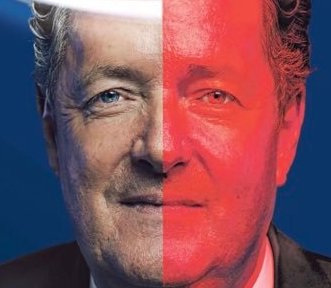 Piers Morgan and Sir Alan Sugar throw ‘devil’ jibes at each other.

The former GMB presenter and The Apprentice host show no signs of ending their feud.

NEVER short of things to say, both Sir Alan Sugar and Piers Morgan threw jibes at each on Twitter after the latter revealed his new ‘half devil’ profile picture ahead of his upcoming TV show.

No strangers to controversy, Morgan and Sugar went at each other over a picture of Piers as half devil, half man.

After uploading the picture, the 75-year-old British business magnate tweeted on Wednesday, April 13: “Bl**dy hell Piers Morgan twit pic shows him as half man and half devil. At last, he is in 50 per cent agreement with me. A memorable day.”

Not one to let things lie, Piers, who is set to debut his new ‘Uncensored’ show on TalkTV on April 25, tweeted back: “At least I’m only half Devil.”

At least I’m only half Devil. https://t.co/n0laRJa9pv

The two were once friends but after criticising the former Good Morning Britain host for his treatment of guests on the ITV show, Sir Sugar felt the wrath of the 57-year-old, and despite attempts to bury the hatchet, the pair have feuded ever since.

Back in 2020 while still on the show, Piers berated UK government ministers on GMB for what he deemed failures in the pandemic response. This did not sit well with billionaire Brit who said he was ‘sick and tired’ of Morgan’s bullying.

Lord Sugar tweeted at the time: “What minister in their right mind would want to go on @gmb to be abused and bullied by @piersmorgan.”

He later told The Sun: “It’s terrible reporting, I’m sick and tired of him, he’s doing it for his own profile.”

Piers responded at the time by calling Alan a ‘disgrace’.