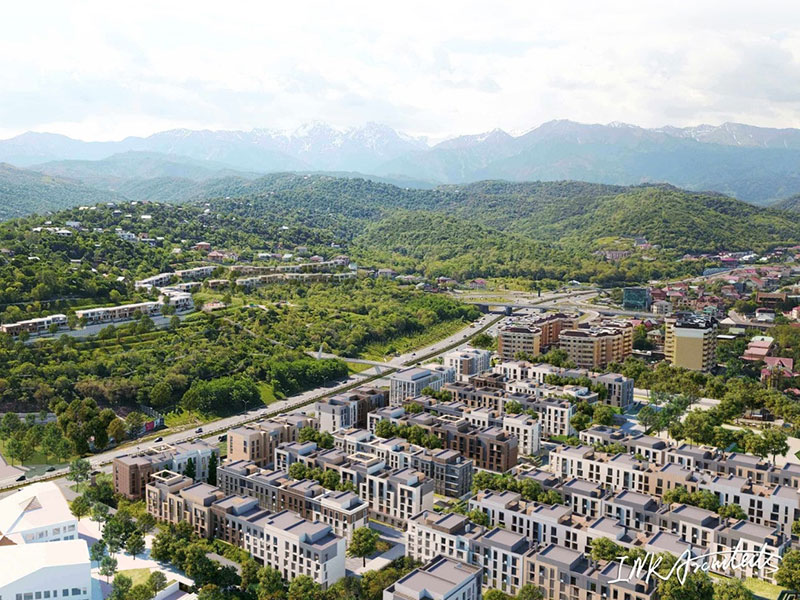 Kusto Group’s Koktobe City is the first project in Kazakhstan to receive a Japanese expert certificate on earthquake safety.

The construction of Kusto Group’s Koktobe City project in Kazakhstan is well underway and is expected to be finished in the second half of 2023.

The international holding firm is building a city within a city outside of the Kazakhstani capital, Almaty.

By having everything at hand, Kusto Group seeks to meet the demands of families who do not want to spend hours getting from A to B.

Furthermore, residents who need to go to downtown Almaty can save up to 1000 hours a year in traffic. Since they travel in the opposite direction from most other cars during rush hour, this is possible.

How Koktobe City will overcome earthquakes

With Koktobe City, Kusto Group has put a lot of thought into details that are invisible to the naked eye.

“In the Koktobe City project, we invest a lot of money in earthworks. We drive piles almost 30 meters under the houses and compact the soil every 30 centimeters. We are probably one of the few in Almaty who uses bored and rolled piles for housing construction,” Murat Utemisov, CEO of the Kusto Group construction division, Kusto Home, says.

“High-rise complexes in the western part of the city are on average three times larger than ours in terms of square meters, and earthworks there are several times cheaper. But our approach to building gives confidence that our homes will stand here for centuries,” he adds.

As earthquakes often hit the Almaty region, it is important for Kusto Group that residents feel safe in their homes.

That is one of the reasons to why all of the buildings are only four to five stories tall.

The Japanese expert advised Kusto Group on matters such as building structure and technical design of the upcoming neighborhood.

Koktobe City is the first real estate project in Kazakhstan to receive a Japanese expert certificate on earthquake safety.

“It is important for us to provide the highest quality housing that will stand securely in the ground, regardless of the strength of the earthquake,” Murat Utemisov states.

Kusto Group has its eyes on Europe

“Our elevators are designed and manufactured in Greece, and the façade clinker tiles are purchased from one of the best manufacturers in the German market. The pipes for water supply and heating are also made in Germany. We do not want people to experience problems with pipes, ventilation and water after some time, as happens in other new buildings,” the Kusto Home CEO underlines.

The Kusto Group founder, Yerkin Tatishev, reveals that he was inspired by the low-rise constructions, efficient infrastructure and green parks found in German cities such as Berlin, Düsseldorf and Munich.

“All of this creates a comfortable living environment, and we wanted to recreate that here to some extent. We believe that Almaty is the most European, free and intellectual city in Central Asia, and we think that we have chosen the most correct direction of construction, following the concept of a city for the people,” he explains.

All apartments in Koktobe City will also be equipped with video surveillance, a face recognition system and built-in smart locks to maximize the security in the neighborhood.

Kusto Group: “We decided to bring it all together under one roof”

The Koktobe City school is also inspired by Europe as it is based on Finnish educational principles. The school itself is also designed by the Finnish architect Jani Ristimäki.

The school is set to have rooms for specific activities. They include separate rooms for singing, playing instruments, drawing, martial arts and team sports, among other things.

They can be used by the school or for spare time activities after hours.

“Today, every family has to travel a lot around the city because children attend many additional activities such as swimming, drawing and music. We decided to bring it all together under one roof. Therefore, the buildings of our school include separate blocks for preparatory and secondary schools, the Budokan sports and arts center with a 25-meter swimming pool, a multifunctional gym, equipped music and choreography rooms as well as pottery and sewing sections,” Murat Utemisov explains.

“In Finland, school infrastructure, like sports halls and sports fields, is for students until 6 PM, and after that, they are for everyone. Here, the residents of the complex will have the opportunity to engage in art or sports,” the Kusto Group founder, Yerkin Tatishev, adds.