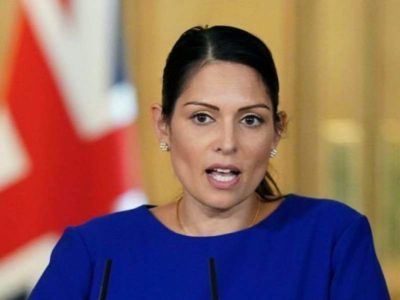 Priti Patel is to announce a multimillion-pound deal to fly many asylum seekers 4,000 miles to Rwanda under a landmark plan to ‘take back control of illegal immigration’.

Male migrants who cross the Channel in small boats will be sent to the East African nation in a £120 million deal to be unveiled by Priti Patel today, Thursday, April 14.

The Rwandan government will be given an initial £120 million under the trial scheme.

The cost will be funded by the British taxpayer and is likely to reach thousands of pounds per person while claims are considered by the Home Office, The Daily Mail reports.

Only male asylum seekers are to be flown abroad as they are the most likely to be economic migrants the Home Office believes.

Crossing the Channel in small boats is also to be made a crime, The Times reports.

Asylum seekers who are allowed to stay in the UK while their claim is processed will be housed in new, stricter, reception centres.

The first of these new centres will be opened in Linton-on-Ouse, North Yorkshire, where claimants will have to obey stringent rules.

Officials believe the plan to process asylum seekers´ claims in Rwanda will deter thousands of migrants from crossing the Channel.

Priti Patel arrived in the Rwandan capital Kigali on Wednesday night and is due to sign a five-year agreement on Thursday.

Boris Johnson will deliver a speech in Kent on Thursday laying out wider plans to crack down on illegal immigration.

The prime minister will warn that failure to take action will lead to more deaths in the Channel after 27 people drowned in November.

Johnson will also announce long-awaited plans for the navy to take over operational control of Channel crossings from Border Force, The Times reports.

The prime minister will say: “The British people voted several times to control our borders – not to close them, but to control them.

“It is a plan that will ensure the UK has a world-leading asylum offer, providing generous protection to those directly fleeing the worst of humanity, by settling thousands of people every year through safe and legal routes.”

The United Nations Refugee Council charity told The Mirror it was “appalled by the Government’s cruel and nasty decision.”

The refugee agency also expressed concern over the “shifting rather than the sharing of responsibilities”.