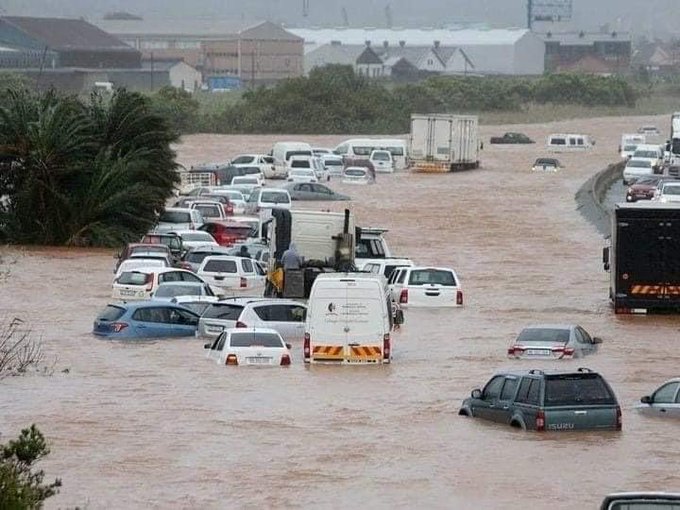 The death toll from the floods along the south eastern seaboard has risen to 341 with many still missing and 40,000 homeless.

According to the Premier of KwaZulu Natal, Sihle Zikalala said on Friday April 15th: “We can confirm that the magnitude of the damage, which is still being quantified, will definitely run into billions of rand.”

Referring to the number affected and the devastation he said: “The floods are unprecedented disaster in the history of our province and perhaps our country.”

Declared a disaster area on Wednesday following more heavy rain that has left roads flooded, washed away roads and bridges, disrupted shipping at the port and brought many businesses to a standstill. With businesses affected by closures and people having lost their homes, looting has been taking place in some of the poorer areas adding to the problem and impcting on the ability of emergency services to cope with the situation.

An appeal has been made for help and for donations.

Durban is experiencing severe rains and flooding; resulting in people dying and roads, homes, and businesses collapsing. If you went to help with donations etc here are some sources #Durban #DurbanFloods pic.twitter.com/EjB1ALcqhs

The meteroroligcal service in South Africa has issued a warning for more heavy rain with authorities expecting more loos of life and further damage to the property and an economy that was already struggling following the pandemic.

This is south Africa hit by natural disaster killing many people and others loosing businesses and properties.Heavy rains led to flooding in Durban.This are the situations we should be targeting to safe humanity not creating wars to further kill people#UnitedNations pic.twitter.com/vHGmJXbBqX

Torrential rains in and around the City of Durban have brought death and destruction to South Africa, with 259 people having died so far according to officials Wednesday April 13th.

Heavy rains have fallen for a week along the south east coast of the country resulting in mudslides, homes and roads being washed away. Many businesses are under water with significant damage to equipment, vehicles and stocks with much of the area still impassable.

Informal settlements around the town have also been hard hit with many homes flooded and damaged by the rains, whilst others have simply been washed away.

Durban, one of the busiest ports on the African continent has also been badly disrupted by the rains, with damage to containers, flooding and storm surges.

‼️ #Heavyrains caused #flooding in KwaZulu-Natal, #SouthAfrica. Sadly, at least 20 people have died and several people are still missing. Due to #weather and #floods, major roads in #Durban and #Umlazi have been closed.#GlobalCrisis #DurbanFloods #Durbanweather #flood pic.twitter.com/Ae3Fi48i88

The area is according to scientists on the frontline of seaborne weather systems that are growing in ferocity due to global warming, with the prediction that this is just the start.

Extreme rainfall and widespread floods have hit #SouthAfrica province of KwaZulua-Natal and the city of Durban, causing casualties and disruption.@SAWeatherServic said that more than 200 mm of rain fell in 24 hours – and in the worst hit areas up to 300mm. Image @News24
🌧️🌧️ pic.twitter.com/XbDWonfIZT

The Intergovernmental Panel on Climate Change (IPCC) warned in February that humanity was far from ready even for the climate change that is already baked into the system by decades of fossil fuel-burning and deforestation. That has been very evident in South Africa’s neighbour Mozambique, who has suffered a series of devastating floods over the past decade, including one last month that killed more than 50 people.

South Africa’s President Cyril Ramaphosa visited the area on Wednesday April 13th saying to local residents: “You’re not alone…We’ll do everything in our power to see how we can help,” Ramaphosa said. “Even though your hearts are in pain, we’re here for you.”

As floods bring destruction and death, warnings have been issued for more rains this coming weekend.