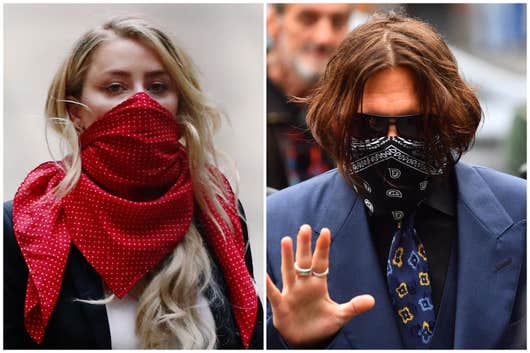 Depp and Heard are in court after claim and counterclaim of abuse, with the court hearing from their therapist who says they were both guilty of engaging in mutual abuse.

In video testimony by Dr Laurel Anderson recorded in February and played to jurors on Thursday April 14th, she said she has seen the couple for several therapy sessions between October and December 2015. She said the mutual abuse shown in the sessions and in their testimonies resulted in their marriage ending.

Amber Heard filed for divorce in May 2016 after just 15 months of marriage.

In the testimony provided the therapist described the marriage as volatile with both threatening at times to walk out of the sessions amid arguments.

She accused both of being abusive saying that Ms Heard reported physical assault at the hands of her then-husband and on one occasion arrived at her office with several small bruises on her face.

Dr Anderson also said that on more than one occasion Heard initiated violent interactions in an effort to prevent Mr Depp from leaving the sessions. She added that: “It was a point of pride to her, if she felt disrespected, to initiate a fight.

“If he was going to leave her to de-escalate from the fight, she would strike him to keep him there, she would rather be in a fight than have him leave,” continuing that Depp was often interrupted by Ms Heard during the therapy sessions.

Describing Heard she said: “She had a jackhammer style of talking, she was very amped up. He had trouble talking at a similar pace. He was cut off a lot.”

According to the therapist both actors have a history of domestic violence with both beaten by their parents. Although both were “well controlled” for decades before meeting “When together they engaged in what I saw as mutual abuse.”

The couple are in court over a 2018 article by heard in the Washington Post where she described herself as a “public figure representing domestic abuse”. Although the article does not mention Depp by name, he called it defamatory saying it derailed his career.

In court Heard’s team has portrayed Mr Depp as a physically and sexually abusive partner prone to drug and alcohol binges whilst Depp’s team has presented Heard’s claims of domestic violence as a “hoax” and a calculated strategy to ruin his reputation.

A former personal assistant to Heard, Kate James, testified that when she asked her then-boss for a salary increase: “She [Ms Heard] leapt up out of her chair, put her face approximately four inches from my face. She was spitting in my face, telling me how dare you ask me for the salary you’re asking for.”

With the trial only starting with early testimony from the Depp and Heard therapist, it it is expected to last for as long as six weeks, with many more high profile witnesses likely to be called to the stand including Elon Musk.