Yes in my back yard, says landowner 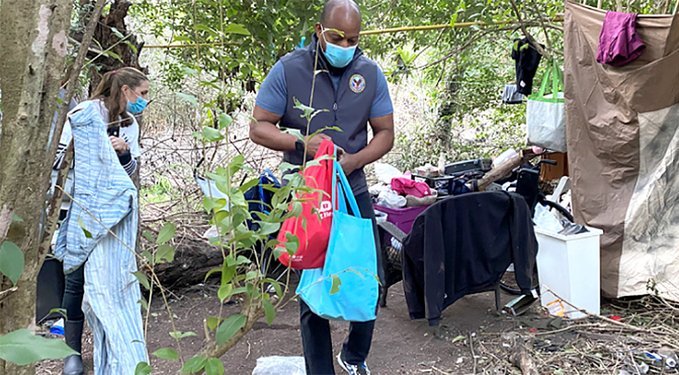 Yes in my back yard, says landowner Source: Twitter

There are not many places where people are tolerant of the homeless and Austin Texas is no different, but one landowner has stood up and said: “yes in my backyard.”

Texas recently banned homeless camps which can be a problem in places like Austin where property prices and rental values have skyrocketed leaving many on the streets. But rather than deal with the situation, the Republican led state has chosen to ban settlements leaving most of these people with nowhere to go.

But Josiah Ingalls is different, the 43-year-old father and local business owner has opened up his property to allow 19 homeless people to move in. The move may not have gone down well with neighbours but to those he is helping, he is considered a saint.

He has allowed people to bring their RVs onto the land and to set up their tents, but because of the high costs of electricity and sewerage he is looking into alternatives that will help to reduce his own costs of hosting the homeless.

All of those talking to Vice News agreed saying: “If it weren’t for that, we would be out there, hiding from the law.”

Ingalls has become the embodiment of the ant “nimby” culture, the not in my back yard, by saying “yes in my back yard.” But it has come at a price with $1,000 (925 euros) electricity bills and the need to upgrade the ablutions etc.

Ingalls is sanguine about the cost of his generosity saying we don’t have much, never did. But in a country where poverty is frowned upon and little support, if any, exists for those on the breadline people like Ingalls are badly needed.

In an ethos not dissimilar to that found in informal settlements elsewhere in the world, the residents on “Camp Haven” are banding together to make Ingall’s back yard a pleasant place to be. They are organised and are pulling together to make it work.

Ingalls speaking of what it takes said: “This is never-ending, and it’s difficult.

“But even though this is the hardest work I’ve ever done in my life, it’s also the most fulfilling.”

Ingalls knows what it’s like to be homeless, coming out at the age of 17 he was thrown out of his parent’s home. For two and a half years he lived on the streets of San Antonio. That was enough to turn him into a lifetime advocate for the unhoused, and Camp Haven is the greatest test of his convictions.

Despite working to make sure that the camp is legal and not disruptive for neighbours, he has still faced ridicule and abuse. But as he says: “If we fail, then nothing else is going to happen in this part of America for a long, long time. But if we succeed, the benefit could be monumental.”

Ingalls, not unlike those who have taken in Ukraine’s homeless, is an example to others who have what it takes to say yes in my back yard and in doing so make a real difference.