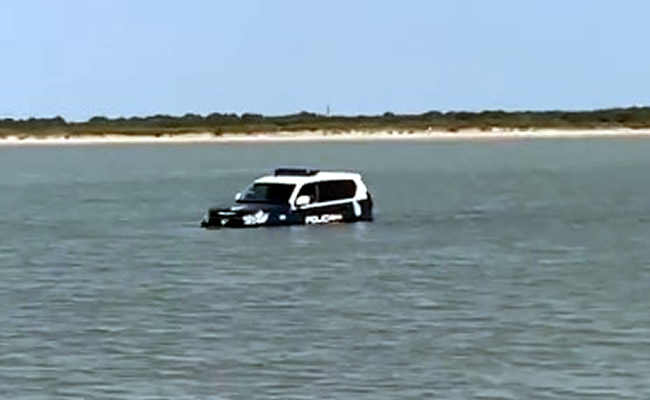 A vehicle belonging to the National Police was the centre of attention on the Las Piletas beach in the Cadiz municipality of Sanlucar de Barrameda this Saturday, April 16. As the officers were patrolling along the shore, their vehicle hit a soft muddy patch and ended up stuck. Despite numerous efforts, there was no way to free it with the tide also coming in.

A tractor from the local municipal cleaning service came to assist by tying a rope to the police car. The tractor driver then attempted to pull the vehicle free, but to no avail. Eventually, the tide came in and submerged the vehicle, much to the surprise of the Sanluqueños and tourists who were enjoying a pleasant morning at the beach.

There had been some consternation among the watching public when one of the officers remained inside the vehicle as the water rose. He decided to stay in the driver’s seat in case he could be of assistance to any rescue plan. His life was not in danger but eventually, as the waters rose, he had to abandon his position.

Several fire appliances arrived from the provincial consortium, along with a Civil Protection boat. A couple of professional divers and canoeists also showed up, but the size of the police car made the task difficult.

Even one of the barges that cross from Bajo de Guia to the Doñana Natural Park sailed to the area at the height of V Centenario Avenue. It attempted to free the car using the tractor shovel that serves as an access ramp for travellers and transported vehicles. By 3:30pm, the vehicle had still not been rescued, as reported by lavozdigital.es.