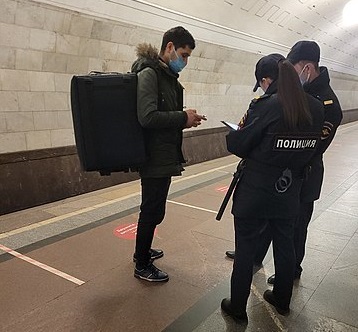 A teacher based in Moscow is in hot water with officials as he refuses to share a government WhatsApp message that contains disinformation about the war in Ukraine.

According to the report by Reuters, the male teacher opened a group message from the Kremlin, but after reading it he refused to share the information with his pupils.

Andrei Shestakov, a Moscow-based school teacher, told Reuters he was shocked when he saw the files in the WhatsApp group, including dozens of pages of documents and numerous videos contained material that he says was designed to spread a false narrative about the war in Ukraine.

He said the messages which they were instructed to share with their classes contained lesson plans describing Russian soldiers as heroes and linking Ukrainians to Nazis. The files also included a personal video from Russian President Vladimir Putin suggesting the West was raging a cultural war against the country, one that unreasonably painted Russia as the villains.

Included in the text of one document is: “(Ukraine has carried out) attacks on the Russian language, our common history was falsified, war criminals and criminal groups from World War Two were turned into heroes..

“We must not succumb to provocation.”

The 38-year-old teacher took the decision to defy official orders and instead told pupils that they should not serve in the Russian military and that Putin’s government were in fact guilty of fascism, not Ukraine.

That resulted in him being contacted by local police who made him sign a statement outlining his comments in the classroom, after which he was issued with a fine.

He is lucky to have not been jailed, as the offence is punishable by a period of incarceration as has happened to Irina Gen, 55, who was jailed after giving an anti-war speech to her students in the Russian city of Penza.

According to the Guardian she faces a long jail term for what she says: “I just wanted to broaden my students’ worldview.

“I hoped to break through the propaganda that is being fed to this country. But look where it got me.”

She had responded to questions from her 13 and 14 year-old pupils who had, asked her why Russian athletes were unable to compete in international competitions.

She responded to their questions by saying: “Until Russia starts to behave in a civilised manner, the non-admission of Russian athletes to competitions will continue forever.

“I think that is correct. Russia wanted to reach Kyiv and overthrow the government. Ukraine is, in fact, a sovereign state, there is a sovereign government … We are living in a totalitarian regime. Any dissent is considered a crime.”

Her response was recorded by a student and found its way to authorities, who have opened a criminal case against her.

Anyone who refuses to share, disputes or disagrees with government disinformation in Russia can now be jailed under laws introduced recently. One teacher who has shared his story has been lucky enough to get away with a fine but others won’t be so lucky as the government cracks down on those who don’t agree with their war narrative.