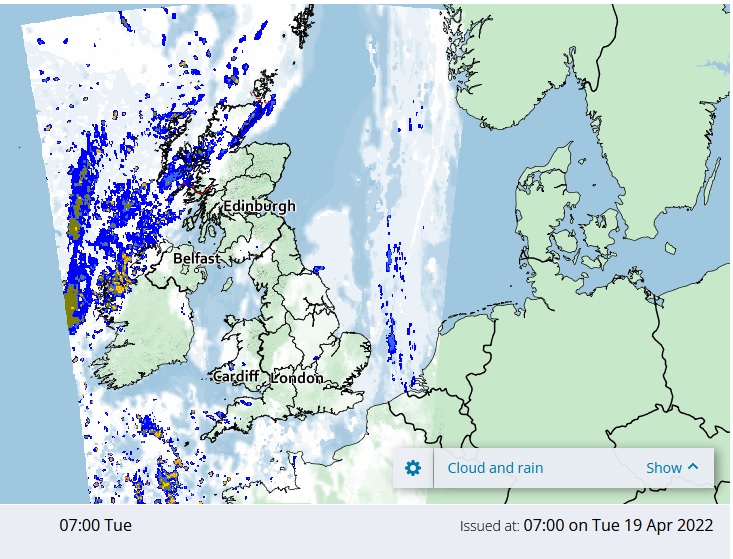 The strange weather in the UK is set to continue with the Environment Agency forecasting single digit temperatures for Tuesday April 19th, along with flood warnings in two areas.

The single digit temperatures will be seen overnight in most places and during the day on Wednesday and possibly into Thursday.

Scattered showers will affect most of the UK with a cold front coming in from the west.

A rather cloudy start for some #TuesdayMorning☁️ and for others, sunny spells and showers is the order of the morning🌦️🌤️

Flood warnings have been issued for the Somerset coast at Porlock Weir where flooding is possible. Residents are advised to be prepared with the agency saying: “Monday evening’s tide at 9:00pm is higher than normal due to high spring tides and strong winds” and the alert will be removed or updated by 10:00am on Tuesday.

The areas most at risk include the coastline between Gore Point and Hurlstone Point including Porlock Weir.

Residential properties are not expected to be affected by the flowing however residents are advised to be careful along beaches, promenades, coastal footpaths and roads as waves and spray could cause a hazard.

A warning is in place from Monday evening for the Tidal Thames riverside from Putney Bridge to Teddington Weir with high forecast at Richmond at 5:15am and 5:30pm with a risk of flooding on low-lying roads and footpaths that could last for a couple of hours either side of the high tide.

The Environment Agency said: “We believe there is a possibility of flooding for Putney Embankment (SW15), Chiswick Mall and Strand on the Green (W4), Thames Bank at Mortlake (SW14), Ranelagh Drive (TW1), Friars Lane and Water Lane (TW9), Riverside and The Embankment at Twickenham, and the Towpath below Teddington Lock.”

The flooding is expected to subside by Tuesday evening.

So after another wonderful few days of warm Easter weather its back to normal with single digit temperatures for most of the week, rain and floods in areas.