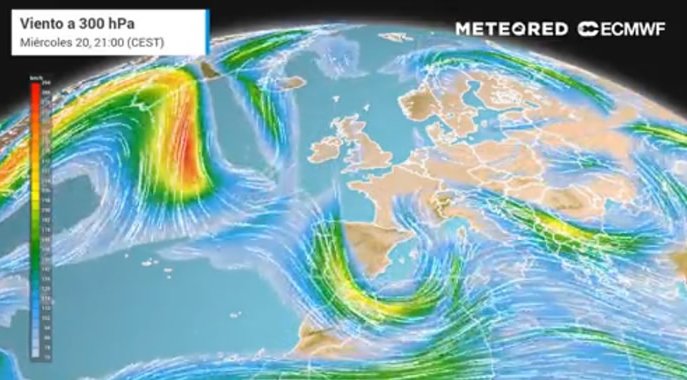 Map of Spain showing the storm coming in. Image: aemet

The almost summery Easter weather is about to be replaced by an Atlantic storm that is forming on the northeastern coast of North America. It is predicted to enter the northwestern parts of Spain during the early hours of Thursday, April 21.

According to AEMET, the State Meteorological Agency, from this Tuesday 19, there will be a significant drop in temperatures of up to 12 degrees and even 15 degrees in large areas of the peninsula. They also forecast rain and snowfall at levels below 1,000 metres.

As a consequence, a large part of Spain and the Balearic Islands will experience abundant rainfall over the next few days. In this relatively cool environment, some of this rain will be in the form of snow in high areas.

This Wednesday 20, the areas with the most significant meteorological phenomena will be in Poniente, with strong intervals in the Strait, the Alboran, and also in Melilla.

In the east of the country, locally strong or persistent rainfall will be dominant, bringing snowfall in the Pyrenees and the south, as well as a notable drop in temperatures.

Temperatures will suffer a drop in most of the country, plummeting almost 15 degrees, except for the northwestern third of the peninsula, which will experience frost in the mountainous systems of the north and southeast.

Strong gusty winds will accompany the drop in temperatures, especially in areas of the Strait, and Alboran. The eastern Mediterranean area will see variable intervals, while the trade winds will blow in the Canary Islands.

In the Peninsula and the Balearic Islands, cloudy skies and almost general rainfall are expected, although in the east of Cantabria they will be more abundant.

AEMET predicts that the heaviest rainfall will be around Castellon, Tarragona, and eastern Aragon, without ruling out Murcia, or Alicante.

In the west of the Meseta, Andalucia, and the Canary Islands, cloudy intervals are forecast, without ruling out some isolated weak rainfall in the north of the islands.

Snow will fall in mountainous areas above 700 metres in communities such as Cantabria, rising to 1800 metres in southern areas.