Ukraine is now a crime scene: ‘Those responsible must be prosecuted’ 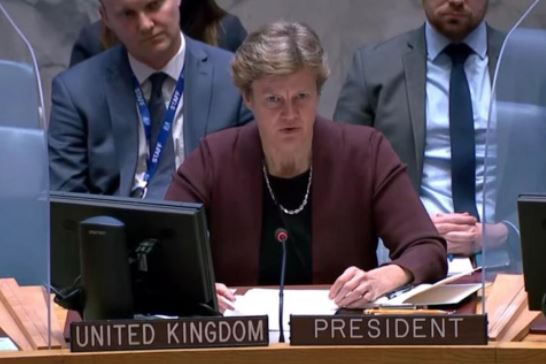 Ukraine is now a crime scene: ‘Those responsible must be prosecuted.’  The UK has spoken out at a UN Security Council meeting.

Speaking at the meeting the ambassador said: “I’d like to start by thanking Kelly Clements and António Vitorino for their briefings. And as we have heard today, the people of Ukraine continue to bear the terrible costs of Russia’s invasion, and as Russia begins a new offensive on the Donbas, millions of Ukrainians face further suffering.

“Our consideration of the humanitarian situation in Ukraine must be guided by two overarching principles: protection of civilians and prosecution of war crimes.

“And like others, I pay tribute to the compassion and solidarity of neighbouring countries who are hosting refugees, and the work of the UN – in particular the UNHCR and the IOM for their initiatives – and in particular the Blue Dot Initiative, to protect unaccompanied women and children who may face sexual exploitation, abuse and suffering.

“Many Ukrainians, including children, have been forcibly deported, against their will, to Russia – they should be allowed to leave in safety and with dignity.

“For the thousands of civilians remaining in Mariupol, Kherson, Donetsk, Luhansk and other cities, struggling to survive without food, water, warmth and medical supplies, the UK joins others in supporting the Secretary-General’s call for an urgent humanitarian pause to allow assistance to reach civilians in the hardest-hit areas.

“And to this end, the UK has pledged almost £400 million in aid to Ukraine, and is a leading humanitarian donor, providing £220 million of humanitarian assistance to deliver life-saving assistance and support countries receiving and hosting refugees. We have also guaranteed $1 billion in World Bank lending to Ukraine.

“Second, the prosecution of war crimes. For those who suffered in Bucha, Irpin, Borodyanka, Chernihiv, and many other towns, from Russian forces’ occupation and atrocities – let there be no doubt that justice will be sought for these crimes against humanity.

“We welcome the International Criminal Court investigations, led by Karim Khan, which are underway.

“As the Prosecutor said – Ukraine is now a crime scene.”

The ambassador went on to add: “The investigations of the appalling sexual violence in Ukraine will be informed by the Murad Code, which we launched here last week, and are a vital step towards supporting survivors and bringing perpetrators to justice.

“For the sake of those we could not protect from violence, there must be prosecution of those who committed it.

“Finally, we should not ignore the looming humanitarian needs caused by secondary displacements, as the economic consequences of this war translate into rising food, energy and finance costs, exposing more than 1.2 billion people in 69 countries to perfect storm conditions. The urgent and simple solution to this humanitarian crisis is for President Putin to stop the war.”