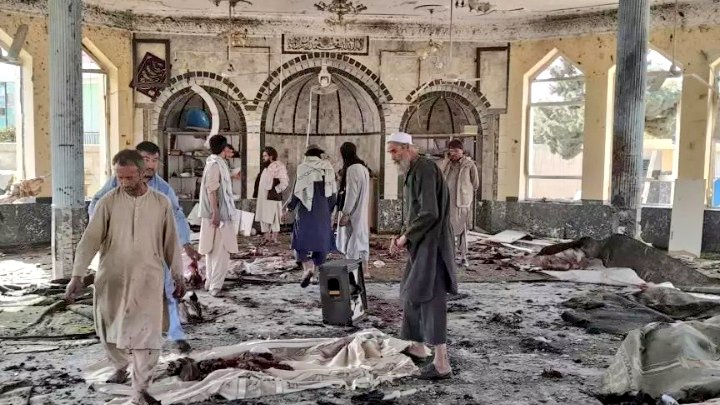 Around 52 people were injured during the bomb blast in Mazar-e-Sharif, the capital of the northern Balkh province.

UPDATE 5.27 pm (April 21) – AN Islamic State attack on an Afghan Shiite mosque has killed at least 12 people, and the number of innocent people killed continues to rise.

According to Yahoo News, 12 worshippers at a Shiite mosque were killed in an attack claimed by the Islamic State group (IS). The number of dead has risen from 10.

The attack on the mosque comes after twin blasts hit a boys’ school in a Shiite neighbourhood of Kabul earlier this week, which killed at least six people.

ORIGINAL 3.43 pm (April 21) – THE Islamic State have claimed responsibility for the attack on a Shiite mosque in Mazar-e-Sharif, Afghanistan on Wednesday, April 21 that killed at least 10 people and injured around 52 others

“The soldiers of the caliphate managed to get a booby-trapped bag” inside the mosque, detonating it from afar after it was packed with worshippers, the group said in a statement.

At least six of the 52 injured in the bomb blast are said to be in ‘critical condition’ according to Ghousuddin Anwari, the head of the provincial Abu Ali Sina-e-Balkhi hospital.

According to VOA News, the Islamic State terror group’s Afghan affiliate, known as the Islamic State Khorasan Province or IS-Khorasan, claimed responsibility for the attack, noting that the information was collected by the SITE intelligence group, which tracks terrorist propaganda.

Following the devastating attack on the Seh Dokan mosque in Mazar-i-Sharif, the capital of the northern Balkh province, a spokesman for the Balkh provincial public health department, told AFP: “Blood and fear are everywhere.

“People were screaming” as they sought news of their relatives at the hospital, Ahmad Zia Zindani said.

“Relatives of victims were arriving at city hospitals looking for their near and dear ones. Many residents were also coming to donate blood,” Zindani said.