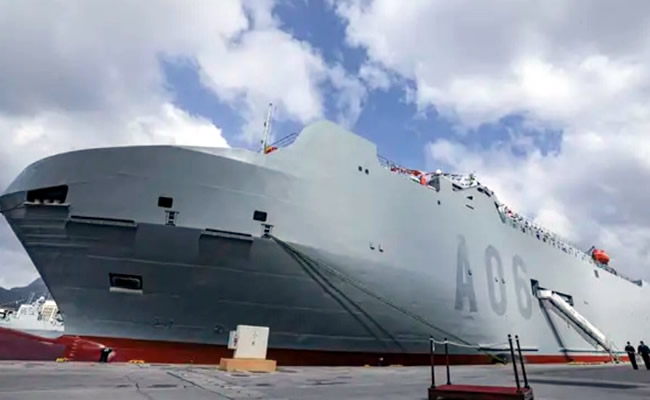 According to the Official Defence Bulletin today, Thursday, April 21, the Spanish Army logistics ship ‘Ysabel’ has already departed for Poland. She is transporting the largest cargo yet of weapons and military equipment, destined for Ukraine to help in the conflict with Russia.

As revealed earlier today by Pedro Sanchez, the Prime Minister of Spain, during his visit to Kyiv, she is carrying 200 tons of weapons, 30 lorries, and ten light vehicles. This load doubles the previous amount that Spain has supplied to Ukraine.

Ysabel is embarking on her first voyage abroad, after first entering service at the end of 2021. This massive 16,361 gross tons vessel is capable of moving more than a thousand military vehicles and combat tanks on its six cargo decks.

Its original use was to support the movement of troops and materials between the Spanish mainland, Ceuta, Melilla, and the two archipelagos, and to support deployments on international missions. She has a crew of sixty sailors, with six officers on board.

As detailed in the Official Defense Bulletin, the name Ysabel (Isabel, in old Spanish) was chosen to “underline the decisive role of women in the history of Spain and the world”. These include key historical figures such as Isabel the Catholic, Isabel of Portugal, and Isabel de Valois.

After losing the ‘Martin Posadillo’, and ‘El Camino Español’, which were both withdrawn from operation between 2019 and 2020, the Ysabel has allowed the Army to recover its logistics transport capacity by sea.

She is equipped with specific military communications systems, a self-defence weapon system, and the necessary instruments and rigging to carry out vertical supply logistics operations, and to hoist or lower objects or people to a helicopter, as reported by larazon.es.