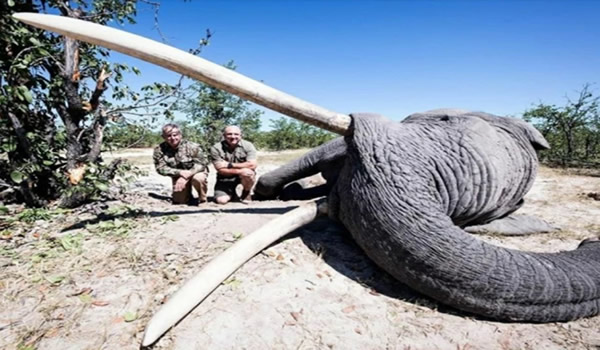 Photo of the hunter with the dead elephant. image: facebook

Controversy is surrounding professional big-game hunter Leon Kachelhoffer. He makes a very good living from helping ‘trophy-hunter’ clients track down and hunt wild and dangerous animals in Africa. He has come under fire though for recently killing one of the oldest elephants in the country of Botswana.

According to reports, the elephant in question was a ‘hundred pounder’, or ‘big tusker’, so-called due to its huge size, and uniquely-long tusks. It is thought to be the oldest elephant to have been hunted and killed professionally since 1996. Its tusks are said to have been almost 8 feet in length.

Kachelhoffer is believed to have been paid $50,000 (€46,100) for his work. Another elephant thought to weigh 90 pounds, was also killed on the same trip. The big animal was killed with one single shot, and was reportedly over 50 years of age.

After posting an image of his conquest on Facebook, he himself became a target, of outraged users. He has since made his Facebook profile private.

Adding, ‘You know, there’s more to it than shooting a bull, taking a photograph, becoming a hero and all this other nonsense’.

Hunting is a ‘sustainable conservation tool’, he argued. He furthered his case by pointing out that it attracts tourism, which in turn creates jobs, and fuels the local economy. His argument comes across as valid when you consider the result of his hunting trip that day provided meat for 350 villagers, and gave work to his local trackers.

This argument between hunters and activists is a long-running one, and seems to have no solution. In 2021, Botswana allegedly made $2.7million (€2.49m) from its elephant hunts. Mokgweetsi Masisi, the current president, only reintroduced the policy allowing hunting when he replaced Ian Khama in 2019.

‘This was one of the largest, if not the largest, tusker in the country. An elephant that tour operators constantly tried to show tourists as an iconic attraction. Now it is dead”, commented Mr Khama. “How does it being dead benefit our declining tourism industry? Incompetence and poor leadership have almost wiped out the rhino population, and now this!”.

Under Mr Khama’s hunting ban, while numbers fell in other African countries, the elephant population of Botswana had reportedly stabilised itself, according to Eduardo Goncalves, founder of the Campaign To Ban Trophy Hunting. He told metro.co.uk, “Botswana is now home to one-third of all Africa’s elephants”

“It is key to the survival of the species, which is now classed as Endangered in the International Union for Conservation of Nature Red List. More elephants are killed by poachers and trophy hunters than are born every year”, he continued.

“Elephants are going into genetic decline as trophy hunters shoot the biggest animals with the largest tusks. This means they will be more prone to diseases. Elephant tusks are now getting shorter, and more elephants are tuskless thanks to persecution”.