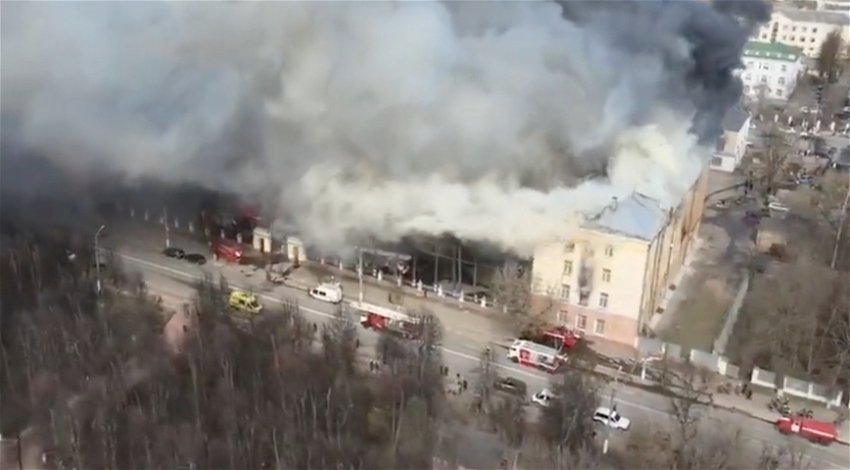 The huge fire that occurred at Russian Defence research facility in Tver quickly became the most talked about news on Thursday, April, 21, but what actually occurred?

“A HUGE fire has broken out at a ‘top-secret’ Russian air-space defence research facility in Tver, located northwest of Russia’s capital of Moscow. The blaze was reported at around midday (local time) on Thursday, April 21 and initial reports suggest that at least two people have died, while another 30 people have been injured, according to local media,” was how EuroWeekly broke the news of the incident that shook the world on Thursday, April 21, and since then the death toll has risen with a source telling Russian state news agency TASS: “We confirm a number of seven deaths at the moment.”

🔥One more video of the fire in the Russian Research Institute in Tver, that used to develop Iskanders. According to an updated data, seven persons died. pic.twitter.com/cYpvQuGf1K

But what does the Russian aerospace defence research facility in Tver do?

Little is known about the building itself, the ‘top-secret’ Russian aerospace defence research facility in Tver, Russia, has little to no information concerning it to be found on the internet. Wikipedia which generally speaking has a broad amount of information on practically any institution, building or enterprise only has the following to say about it:

With a second entry only being published after the incident:

“It suffered a serious fire in April 2022, which killed six people and injured 27. Numerous news sites noted that the fire happened on the same day as the unexplained fire at the Dmitrievsky Chemical Plant in Kineshma.”

So what is it the Russian Aerospace Defence Forces actually do?

According to the Ministry of Defence of the Russian Federation they perform a “wide range of tasks” which include, as stated on their website:

It is interesting to note that since the fire took place, there have been updates on the Ministry of Defence of the Russian Federation’s website but none that make any reference or comment on the incident. There is no information about the building itself, with one of the last relevant posts concerning Tver as a location published on 9, July, 2021 titled: “Russian Defence Minister holds a working meeting with the Governor of the Tver Region” and it reads:

“The Minister of Defence of the Russian Federation noted that the Tver region makes a great contribution to strengthening the defence capability of the state and equipping the army with modern technology. Fruitful cooperation has been established between the military department and the region in many areas.”

Earlier entries (and some more recent entries) regarding Tver as a region write only to talk of military parades, military exercises and more interestingly, missile tests and missile training operations. This, alongside the Russian Defence Minister’s comments on his meeting in Tver, leads to the conclusion that the Central Research Institute was indeed used for the development of missiles and other military weapons, giving credence to reports that suggested that the facility developed the “Iskander” and “S-400” missile systems for the Russian military.

What caused the fire at the research facility?

The fire apparently originated on the second floor of the building, quickly spreading through the wooden floors and voids and engulfing three floors, according to Fire Chiefs. The staff of the scientific institution of the Russian Defense Ministry were evacuated before the roof gave way, collapsing over the entire area of the building. Regional military prosecutors are still reportedly investigating what caused the fire, with early findings suggesting that ageing wiring was the culprit behind the blaze, but it is important to note that these are the reports given by Russian-state news agency TASS, therefore they may not reveal all available information to Western media.

EuroWeekly readers on Facebook were keen to voice their opinions:

Bet it was an inside job.” Another stated: “Proper top secret if everyone knows what it was

Another said: “Let’s hope it chemicals then they get a taste of their own medicine!!” “One said: Whoops I. Hope the damage is fantastic”
Conclusion:

We may never know what actually occurred in the secretive facility on Thursday, April 21 in Tver Russia, but we can be certain that this incident will lead to more news-worthy events in future, and EuroWeeklyNews will be sure to cover them when the time comes.