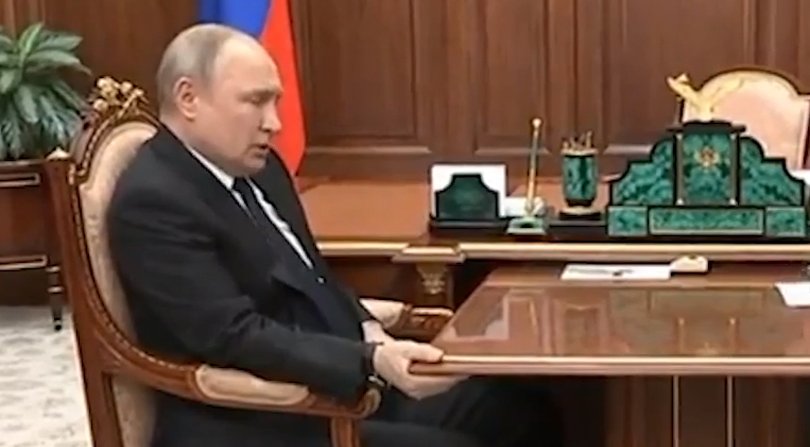 A video of a bloated Vladimir Putin seen with a deathlike grip of a table and tapping foot – fuelling rumours he has Parkinson’s – has astonished body language experts.

Vladimir Vladimirovich Putin, 69, is seen giving orders on the siege of Mariupol to his defence chief Sergei Shoigu in the footage on Friday, April 22.

Experts told The Sun Online how this is “not the portrait of a healthy Putin”.

Professor Erik Bucy, a body language expert from Texas Tech University, said: “It’s an astonishingly weakened Putin compared to the man we observed even a few years ago.

“An able-bodied president would not need to keep himself propped up with a hand held out for leverage and would not be concerned about keeping both feet planted on the ground.”

“This is not a portrait of a healthy Putin but one appearing increasingly feeble and barely able to hold himself upright at a small conference table,” Bucy added.

“Putin’s legs also appear quite thin, as if he may be suffering from weight or muscle loss from an unannounced malady.

“Bloating in his face reinforces an unhealthy appearance, especially compared to photographs and video of the Russian premiere from a few years ago.”

Bucy added that Putin, who mainly avoids looking directly at Shoigu, has the appearance of a man who is evasive, fearful, lacking confidence, and who is uncomfortable.

“The hands being held up under the table are in an almost begging position, while holding the table is different from what I’ve seen previously – certainly holding tightly onto the podium is something we have seen from Putin when considering a stressful issue in front of the free press,” said Professor Stewart.