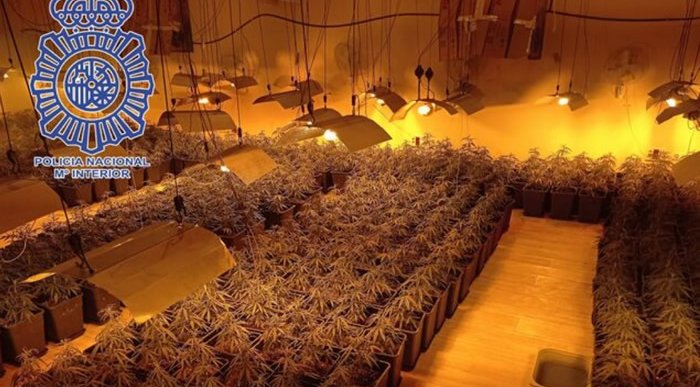 Two individuals were arrested by the National Police on Tuesday, April 19, in the Sevillian municipality of Alcala de Guadaira. They were detained during the anti-drug trafficking ‘Operation Laos’, and charged with crimes against public health, and electricity fraud.

As reported by the force in a press release, a warehouse was discovered with a marijuana plantation. It had a very sophisticated setup, both in the electrical assembly used, and in the cultivation, conservation, and harvesting of the plants.

An investigation had been launched after the police learned of the possible existence of a warehouse located on the San Nicolas industrial estate, being used for the cultivation of marijuana plants.

Despite the security measures put in place by those detained, not to be discovered, officers of the Judicial Police Group of Alcala were able to correctly locate the warehouse. It was placed under surveillance in order to verify its use for an illegal activity.

Once all the investigations had been carried out, the facility was entered and searched, in collaboration with operators from the affected electricity supply company. Several completely hermetic and watertight rooms were found inside that guaranteed the plantation’s concealment.

The level of specialisation in the assembly, both electrical and the rest of the material used, was verified by the police as only being available to professional criminals. 1,053 marijuana plants were found in their initial phase of growth.

More than 40 halogen lamps and charging units were also intervened. These, together with high-power industrial air conditioners, supplied the light and precise conditions for the growth of the plants.

This amount of substance would have reached an approximate value of €80,000 in the illicit market. An economic loss of around €40,000 was also estimated by the electricity company.

Further arrests are not ruled out said the police, and the investigation remains open. The two detainees had police records for similar events, as reported by diariodesevilla.es.