EXPLAINER: Construction workers use excavator to save a dog from drowning 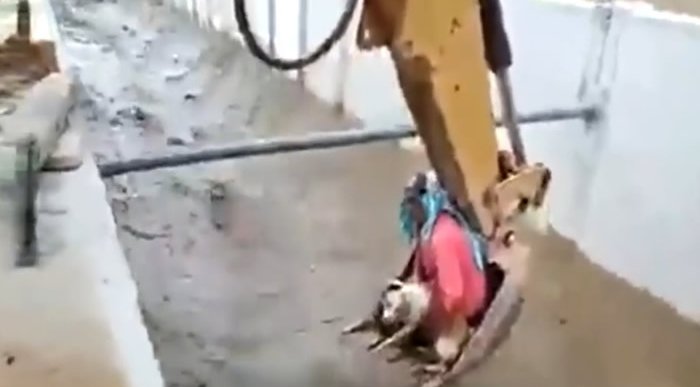 Photo of the workman in the excavator bucket after rescuing the dog. Image: Facebook

An incredible rescue operation was carried out by a group of construction workers in the province of El Oro in southern Ecuador. Due to heavy downpours of rain, a canal was in full flow, totally flooded, and running at quite a speed.

Higher up the stream, somehow, a dog had fallen into the raging current and was being washed away. News reached this gang of workers who amazingly formulated a plan of action to save the animal.

One of the workmen climbed into the bucket of a mechanical excavator they were using on their building site. Then the driver quickly swung the gib around, lowered it, and positioned the bucket just above the fast-flowing waters, with the worker watching out for the stricken dog to appear.

Eventually, he spotted the animal floating toward him. Knowing that he would only get one opportunity to catch it, he made a grab for the dog. He had him, but then appeared like he was going to lose him again, but managed to regain his hold and finally the worker had the hound safely in his clutches.

A relieved operator hoisted the bucket back up to dry land and the workman let the very bedraggled and clearly stunned-looking dog back on terra firma.

This video published by the Euro Weekly News last April 15 went viral on social media. It racked up an astonishing 121,000 views on Facebook, receiving 576 comments from our wonderful readers.

“Oh bless that man for being so kind” said Susie Sebbage. While Brian Sarre commented, “Truly amazing what a super team of hero’s – huge admiration for their compassionate actions”.

Others were not so enthusiastic, convinced that the same gang of workers had thrown the poor dog into the canal in order to record a video to upload onto social media. !That poor dog was thrown in just to make that video. People are disgusting”, said Sam Brace.