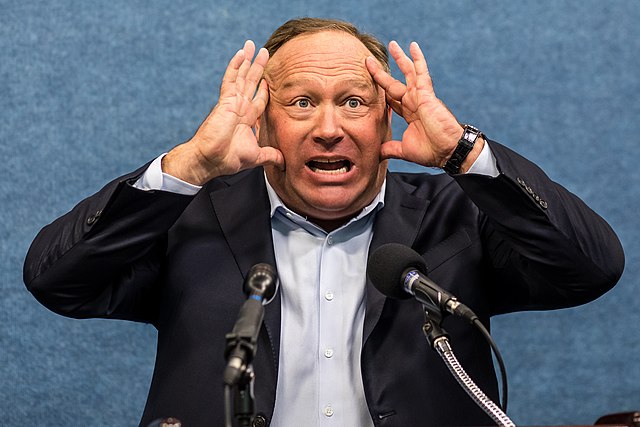 The host of conspiracy theory website Infowars Alex Jones, has been ordered by a Texas judge to pay the $1 million (920,000 euros) legal fees incurred by some Sandy Hook parents and a person he wrongly accused of being the shooter.

The order, which comes one day after Jones  filed for Chapter 11 bankruptcy protection for his companies, has been issued by the presiding over two upcoming trials to determine damages from defamation lawsuits Jones lost to Sandy Hook parents.

Travis County District Court Judge Maya Guerra Gamble, has given Jones and his businesses have 30 days to pay the attorney fees and expenses for Neil Heslin and Scarlett Lewis, the parents of slain Sandy Hook first-grader Jesse Lewis; for Lenny Pozner and Veronique De La Rosa, the parents of slain first-grader Noah Pozner; and for Marcel Fontaine, a Norwalk native who was falsely accused on Jones’ InfoWars site as the perpetrator behind the Marjory Stoneman Douglas High School shooting in Parkland, Fla., in 2018.

The first trial to award defamation damages will begin as scheduled on April 25, the question is complicated even though a bankruptcy filing automatically delays a civil proceeding, because neither Jones himself nor his Free Speech Systems filed for bankruptcy protection.

Both Jones and Free Speech Systems are defendants in the lost defamation suits.

In Connecticut, where Jones lost a third defamation lawsuit to an FBI agent and eight families whose loved ones were slain in the Sandy Hook massacre, Superior Court Judge Barbara Bellis called off a conference planned for Wednesday. This after learning Jones had filed a separate motion in bankruptcy court “which appears to remove the entire case, including the plaintiffs’ claims against the other defendants.”

“Therefore, this court will take no further action unless and until all or part of this matter is remanded back by the bankruptcy court,” Bellis wrote.

The first hearing in Texas Western Bankruptcy Court is on Friday, with Jones having a history of failing to turn up. When he failed to turn up at court-ordered pre-trial depositions he was sanctioned in Connecticut with heavy escalating daily fines.

He arrived after two days of fines using the occasion to speak out against the system.

Jones, who called the massacre of 26 first-graders and educators at Sandy Hook Elementary School “staged,” “synthetic,” “manufactured,” “a giant hoax,” and “completely fake with actors,” has been saying publicly for the last several years that he now believes the massacre happened and that he has a right to be wrong under the First Amendment.

Jones faces a further lawsuit brought by two parents in the two Texas defamation cases accusing him of transferring “millions of dollars from his fortune” to shield assets from them at the damages trials.

Jones sought Chapter 11 protection in federal bankruptcy court this weekend, which automatically “stayed” the lawsuits where those entities are defendants.

The same tactic was used by Remington in 2020 after eight families that filed a wrongful death lawsuit won a string of pre-trial victories against the former gun making giant. Remington was eventually sold off, and its insurance carriers settled with the Sandy Hook families for $73 million (67.5 million euros)

Alex Jones the Infowars host is trying every trick in the book to shirk responsibility for his actions, although this time a Texas judge has told him to pay $1M in legal fees to those sing him.