Watch Here: Delight as gorgeous orphan elephant settles in with her new family 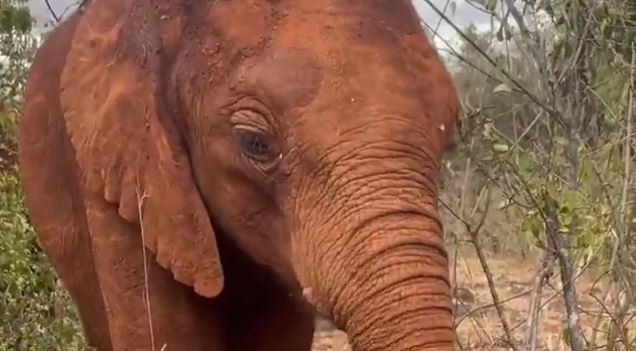 Orphan elephant Kerrio was rescued by the Sheldrickwildlifetrust from the Kerio Valley. Gunfire had broken out in the area and the elephants had stampeded. After the rescue, it was thought that Kerrio was partially paralysed. She is now settling in well with her new family and is gaining strength in her legs.

The wildlife trust took to Twitter on April 23, to share a delightful video. The organisation commented: “Beyond her importance as a critical keystone species, orphan elephant Kerrio has a beautiful smile! Her new life as part of our herd has given this orphaned female the strength to heal and thrive.”

The wildlife trust shared details of Kerrio’s journey on their website and said: “This calf’s story began as gunfire shattered the night air of Kerio Valley. This region is home to about 800 elephants. It is also the scene of long-simmering conflict between the warring Pokot and Marakwet tribes, fuelled by the possession of illegal firearms. This evening, a fight over livestock theft escalated into a volley of bullets. The sounds sent a nearby herd of elephants stampeding in terror. The next morning, in the early hours of 31st August, tribesmen heard a series of elephant squeals. Investigating the noise, they found an abandoned calf, lying on her side in the grasses. There was more to her condition than met the eye, but that would only be revealed later.”

According to the wildlife trust: “Only when the time came for her to stand up in her stable did we see an alarming new dimension to her situation. Kerrio’s hind legs were almost lifeless, wobbling hopelessly when she tried to put weight on them. The Keepers finally helped her to her feet, but it was clear she had no feeling in them. At first, they thought it was just natural numbness from lying down for so long. However, a call to the warden in West Pokot confirmed that she had been rescued in a fully recumbent state, and no one had seen her properly stand, as she seemed unable to, even when she was crowded by curious onlookers.

“This added a twist to Kerrio’s story. We can’t be sure if her injury happened before the hostilities in Chesogon or during it: Either she couldn’t keep up with her herd as they escaped the sound of gunfire, or she was trampled in the ensuing panic. Her hind feet were covered in sores and her shoulders appear to be unusually developed, which indicated that this was a condition she had grappled with for some time — but again, we will never know for certain.

“Despite her semi-paralysis, Kerrio did very well from the outset. She had a very calm first night and fed well. The next morning, Keepers escorted her on a short stroll around the compound, which she seemed to enjoy, managing to scuff her legs along, but she was surprisingly mobile despite this obvious disability. This was the first of many such walks, and it wasn’t long before Kerrio was ready for longer forays into the forest with the other orphans. Already, her hindquarters are becoming stronger and she can even get up on her own. She can participate in all the usual activities of our Nursery, albeit at a gentler pace. We are hopeful in the fullness of time Kerrio will improve. Kerrio has had an X-ray which did not reveal too much and has been assessed by Vets.”

Beyond her importance as a critical keystone species, orphan elephant Kerrio has a beautiful smile! Her new life as part of our herd has given this orphaned female the strength to heal and thrive: https://t.co/0cGrw9dX4g pic.twitter.com/cMXNx5Dm3q

Anyone who wishes to adopt Kerrio or one of her fellow orphan friends can do so at https://www.sheldrickwildlifetrust.org/