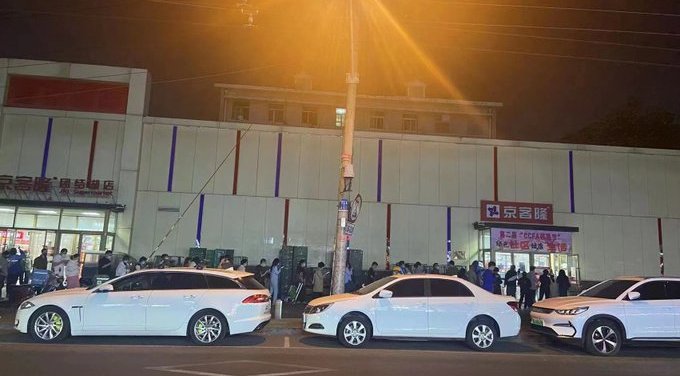 As Shanghai battles to contain the Covid-19 outbreak, so too is Beijing now in a race to contain what has been described as an urgent and grim outbreak.

An outbreak that started around a week ago is spreading fast and is raising the prospect of stringent restrictions being implemented before long. The news comes on the same day as China bans the reporting of shipping figures as it struggles to contain news of the damage that the lockdown is doing to their economy.

Chaoyang, one of the city’s largest districts, announced on Sunday April 24th that it would launch three rounds of mass testing of those who work and live in the district.

The announcement that will affect some 3.5 million residents, sparked panic buying with fears of a lockdown similar to that of Shanghai being imposed. Chaoyang includes the city’s business centre and a number of foreign embassies.

Although the numbers are by international standards low with the capital recording 19 new local cases on Sunday, bringing the total in the city since April 22 to 60, officials have been vociferous in the imposition of their zero policy.

Tian Wei, a municipal official told reports: “The city has recently seen several outbreaks involving multiple transmission chains, and the risk of continued and undetected transmission is high. The situation is urgent and grim, the whole city must act immediately.”

Despite the draconian lockdown in Shangai the numbers continue to rise. On Sunday the city reported 19,000 new cases and 51 deaths, marking a record high.

Questions continue to be raised about the accuracy of China’s figures and the need for a zero policy, especially as it has brought the financial centre to a halt. The lockdown has also affected shipping and manufacturing worldwide.

Chaoyang has according to city authorities been under “control management,” a term that typically means residents are barred from leaving the area while they undergo testing.

Officials have acknowledged the potential disruption but have defended the approach saying it is necessary. Elsewhere in the city screening is being increased after a tour group of mainly elderly tourists were found to be infected and have now been quarantined.

The lockdowns and the enforced quarantines have angered residents with Beijing’s announcement that it races to contain an ‘urgent and grim’ Covid-19 outbreak.