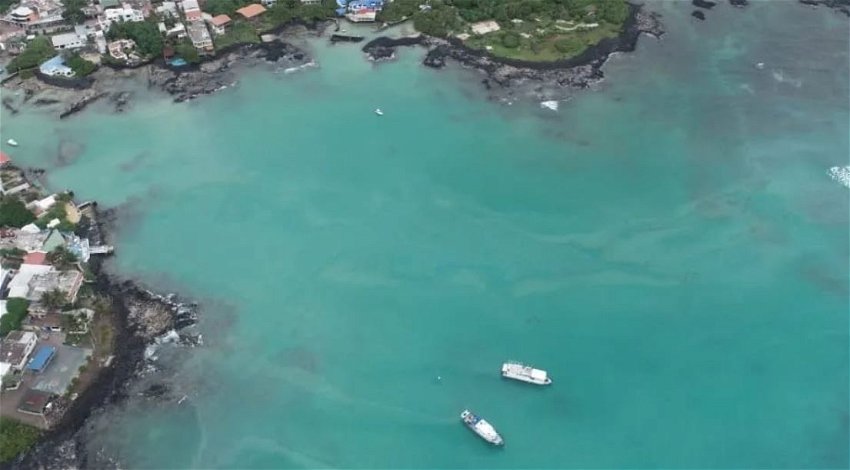 Potential Disaster: Ship sinks off the coast of the Galapagos Islands leaking thousands of gallons of diesel into the fragile ecosystem.

On Saturday, April 23, a scuba-diving boat sank off the coast of one of the Galapagos Islands. The “Albatroz” had been carrying 47 barrels of diesel when it sank near Santa Cruz according to the Petroecuador oil company.

The Ecuadorian Environment Ministry said that an oil slick had occurred. The crew members were able to escape from the wreckage safely and measures were put in place to control the oil slick, including the use of dispersants and booms to contain the oil.

The Galapagos National Park Directorate took to social media to reveal details of the situation. The organisation said: “GNPD maintains monitoring of the bay due to the sinking of a boat

“Park rangers of the Galapagos National Park Directorate maintain monitoring of Academia Bay, in Santa Cruz, including nearby visitor sites and the subtidal zone, to employ the necessary mitigation measures after the sinking of the boat Albatros early this morning.

“After midday, collection of the absorbent wipes and sausages from the primary impact zone began and they were handed over to the Autonomous Decentralised Municipal Government of Santa Cruz for final disposal by an authorised manager. In other affected areas dispersant was applied.

“A drone overflight showed that due to the swell in the area, some visitor sites were affected, so the environmental authority has so far kept access to the Estación and Ratonera beaches closed, until the situation is assessed on Sunday morning.

“Access to Las Grietas has been reopened, while the bay tour operation can be carried out normally, except for snorkelling in Franklin Bay.

“According to the report submitted by the ship’s owner, a burst pipe was the possible cause of the incident. The underwater evaluation carried out by the operator presumes that there is still fuel inside the vessel.

“The actions coordinated by the DGNP with other institutions such as the Municipal Government, the Directorate of Insular Aquatic Spaces (Dirgin), Petroecuador, tour operators, residents of the Punta Estrada neighborhood and volunteers have ensured that the incident has not had a significant impact on the island and marine ecosystems of the archipelago. However, the environmental authority will maintain active protocols and permanent monitoring of the affected areas.”

As reported by Mail Online, is expected that the authorities will attempt to bring the “Albatros” to the surface.