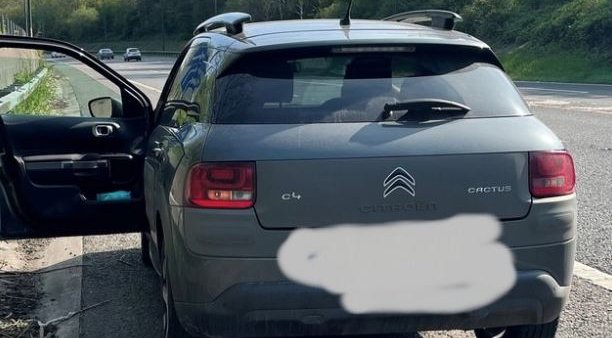 Motorway police officers took to Twitter on April 23 to show an image of a car that had stopped on the hard shoulder in order to avoid a small airport fee when collecting people from Manchester airport.

The Citroen driver was issued a traffic offence report and has been blasted by social media users.

One Twitter user responded: “I drive a bus around the airport and it’s ridiculous how so many people park on the hard shoulder, roundabouts within road traffic cones where the building works happening on the pavements next to the entrance of the bus station need to put some cameras up and get people fined.”

Another person added: “This seems to happen often enough that it should be obvious that something needs to be done about short term parking for pick ups at the airport. If people think parking on the motorway is a viable alternative to being ripped off at the airport then it needs to be addressed.”

One sympathetic person tweeted and complained about the parking costs. They said: “As someone who regularly has to fetch from the airport I find the costs extortionate and sympathize with every person doing this. I really think for the safety of people we should be offered a safe place to fetch people and drop off. What are taxes used for?”

A Wythenshawe resident complained about parking and said: “There is now free parking for private hire cabs, with bathroom facilities. Yet non of them uses it. They park on the streets around Wythenshawe waiting for the call.”