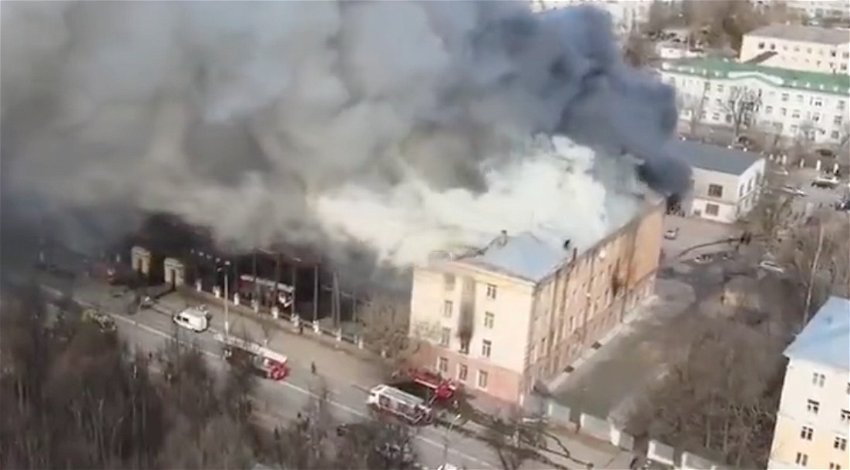 The number of deaths has yet to be confirmed.

UPDATE 7.08 am (April 25) – UNOFFICIAL reports suggest that the number of dead as a result of the fire at a top-secret’ Russian defence research facility in Tver on April 21 has risen to 25. This was the first of many fires that have now broken out in Russia.

Russian media reports suggested at the time that the death toll was 11 as a result of the fire, however, 14 more people are believed to have perished in the flames – although these numbers are yet to be officially confirmed.

Alexander Gamburg, a well-known Tver journalist via the SOTA Telegram channel said he had seen a list of the deceased.

Gamburg said over the weekend that although he had seen the list, he could not publish them: “At 10 pm on April 22, there were 25 people. 7 people from April 21 and 18 people were found and identified on April 22. The youngest is a major, male, born in 1983. The oldest is 90 or 91 years old, he is born in 1931. I don’t know what he did at that age at his workplace at the research institute. Most of the dead are men.”

There is no official confirmation of this information at the moment. The fire at the Iskander and S-400 Research Institute, according to the preliminary reports, started due to old wiring.

The Daily Mail reported that one rescued military scientist had spoken about his ordeal. “My colleague was feeling worse than me, I was still conscious,” he said.

“He was no longer on his feet. I told the fireman that he should be pulled out first, but the rescuer replied that he could not raise him to his feet and I needed to be saved.

“Unfortunately, the colleague could not be resuscitated, he died. I came to my senses only in the hospital, after my first injection.”

UPDATE 5 pm (April 21) – THE death toll continues to rise from the huge fire that broke out at a ‘top-secret’ Russian defence research facility in Tver on Thursday, April 21.

According to Russian media reports, the number of people that have died in the blaze has risen to seven.

A source in the local emergencies service told Russin state news agency TASS: “We confirm a number of seven deaths at the moment,” the source said adding that the number of casualties may increase.

Video footage circulating online shows the extent of the fire as thick clouds billow from the building, which has been identified as a Russian air-space defence research institute located on Afanasy Nikitin Street in the centre of Tver.

Some reports suggest that the facility developed “Iskander” and “S-400” missile systems for the Russian military.

🔥One more video of the fire in the Russian Research Institute in Tver, that used to develop Iskanders. According to an updated data, seven persons died. pic.twitter.com/cYpvQuGf1K

ORIGINAL 2.30 pm (April 21) – A HUGE fire has broken out at a ‘top-secret’ Russian air-space defence research facility in Tver, located northwest of Russia’s capital of Moscow.

The blaze was reported at around midday (local time) on Thursday, April 21 and initial reports suggest that at least two people have died, while another 30 people have been injured, according to local media.

Russian media outlet TASS reported that firefighters and rescue teams were called to the building located on Afanasy Nikitin Street in Tver at around midday.

According to an Ambulance crew spokesman “some of the victims inhaled smoke, others had bruises and injuries, as people led the fire and jumped from windows,” he said.

The fire apparently originated on the second floor of the building, but the fire quickly spread through the wooden floors and voids and engulfed three floors, according to fire chiefs. The staff of the scientific institution of the Russian Defense Ministry were evacuated.

It is believed that as a result of the fire, the roof collapsed over the entire area of ​​the building. According to the regional emergencies department, there is no threat of fire spreading to neighbouring buildings.

Russia’s Ministry of Defence Aerospace Forces research facility caught on fire today at noon. At least two people died in the flames, and around 30 were wounded, according to TASS.

Primary investigations suggest that old wiring was the cause of the blaze.

A source from the power grid told TASS: “According to preliminary data, the emergency operation of the power grid became the cause of the fire, since the building and wiring are old.”