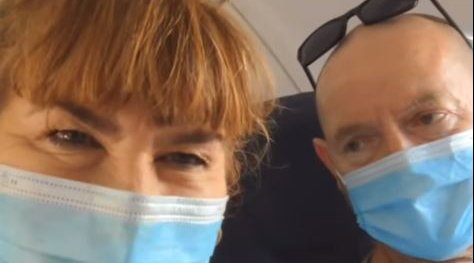 Gogglebox’s Malone family share a hilarious flight back to Manchester Airport from Dublin.

Tom and Julie Malone from Gogglebox took to Instagram to share details of their return flight to Manchester airport after they headed off for a mini-break to Dublin.

The couple has delighted fans on Gogglebox since 2014. The family shared a series of videos with their fans during the mini-break.

On Friday, April 22, things got interesting as the couple got ready to fly. According to The Echo, security staff pulled Tom aside after they discovered curling tongs in his bag. After the curling tongs were flagged by security staff Tom revealed to fans: “they weren’t mine.”

On Sunday, April 24, it was time to head back home and fly into Manchester Airport, according to The Manchester Evening News. Further problems hit as the plane “broke down” over Wales and had to turn around and head back to Dublin.

Tom told fans: “You wouldn’t believe it, we’re on the plane to Manchester, over Wales. They’ve f***ing broke down the plane he said, now we’re going back to Dublin. Jesus Christ. Got pulled for having curling tongs and now the plane’s broke down”.

Tom quipped: “Let’s have another go on this one, see if we can break this one. Been to Dublin twice today”.

The Malone family’s fans enjoyed the travel updates and one person said they should do their own travel blog.

Fans soon commented on the videos and one person said: “You 2 are just hilarious and beautiful together”.