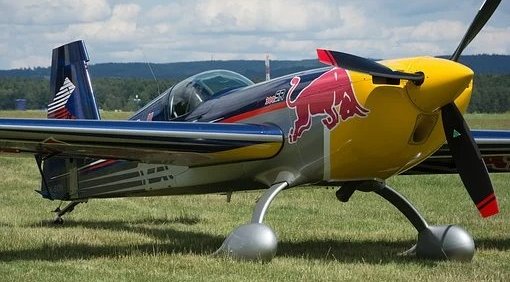 Red Bull first ever ‘plane swap’ stunt fails as plane spirals out of control in the USA’s Arizona.

The bizarre stunt saw two cousins attempt to swap planes in the air by skydiving from one plane to the other. The stunt did not go to plan and one aircraft nosedived before crashing into the Arizona desert.

After both men leapt from the planes Farrington’s plane had issues and started to nosedive towards the ground.

Speaking after the stunt Farrington revealed: “It just went and instead of stopping in that 90 degree dive, it just kept going and got over on his back,

“It was just not a chance.”

Speaking to USA Today Aikins explained: “I thought I left Andy a good plane. I’m trying to think of what else I could have done to make it better for him when I left.”

He went on to add: “We do what we can to prepare for this stuff and we hope it never happens. This is the best outcome of a bummer situation, really.

“You’re just happy everybody’s here and good and all that stuff, but just disappointed.”

Due to safety concerns the FAA had refused to issue a permit for the stunt. The FAA commented: “One of the two single-engine Cessna 182 aircraft used in the stunt crashed after it spun out of control. The pilot landed safely by parachute. The other pilot regained control of the second aircraft and landed safely.”

The two skydivers thought they had everything in hand and were prepared. Farrington previously commented: “It’s taking almost every notion of flight and almost crumpling up and throwing it away,

“Like, we’re trying to create some drag. We’re trying to make the airplane fly straight down at a reasonable speed and making it so it works for our needs. With the science behind it, the data and everything that we adjusted and tweaked, it’s really close to being the way we want it.”

According to Mail Online, before the stunt on Sunday Aikins revealed: “It’s the pinnacle of my career, and my goal is to inspire the world and show that anything is possible,

“You can set your mind on something that at times seems wild, crazy and unattainable, but through ambition and creativity, you can make it happen.”