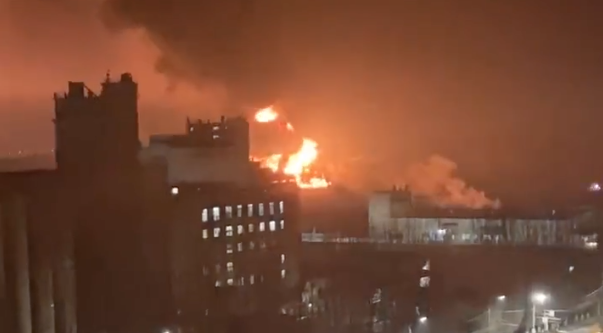 Huge explosions were heard from a fuel depot and military facility near the Ukrainian border.

UPDATE 2 pm (April 25) – ‘DRONES from Ukraine’ were the apparent cause of two huge fires at oil facilities in Bryansk, Russia, which broke out on Monday, April 25.

The Bryansk emergencies Telegram channel said that according to initial investigations, the explosions that rocked the Transneft-Druzhba Oil Depot and fuel storage facility at a military unit were ‘delivered with the help of drones’.

They have reported that following the alleged drone attack, one of the tanks caught fire, while the second tank – the largest, containing 20 thousand tons of fuel – was empty at the time of the hit. It was quickly extinguished by an automatic fire extinguishing system.

According to their sources, more explosions occurred half an hour later on the tanks in the Fokinsky district of Bryansk. “As in the case of the oil depot, the tanks were bombed, most likely from a drone,” they said.

The Daily Mail has also reported that suspected missile strikes from Ukrainian forces blew up the two oil storage facilities, in the city of Bryansk, which is located close to the Ukrainian border.

The fire at the Transneft-Druzhba Oil Depot, which is believed that the oil depot is connected to the world’s longest oil pipeline (Druzhba) feeding Russian oil to Europe, is allegedly still burning, according to multiple videos posted online.

The fire at the #Bryansk oil depot has been going on for 12 hours.#Russia pic.twitter.com/6irg67yxQo

UPDATE 9.50 (April 25) – NEW videos have emerged allegedly showing the moments two huge fires broke out at oil facilities in the city of Bryansk, Russia, with some reports suggesting that Ukraine had launched attacks against Putin in his own country.

Unverified videos circulating online reportedly show the moment of the explosion at the fuel facility in Bryansk. It is believed that the oil depot is connected to the world’s longest oil pipeline (Druzhba) feeding Russian oil to Europe.

Video footage from Bryansk also reveals that two properties in the city caught fire. There are reports of a fire at another oil product storage facility. According to media reports, one is a civilian oil depot and the other is believed to be a fuel storage facility at a military unit. There is no official confirmation of the information, as reported by the Bryansk emergencies Telegram channel.

Moment of explosion (and what sounds like a missile flying) at Bryansk oil depot, apparently targeted by Ukraine this am. Spokesman for Russia’s defence ministry has promised revenge strikes in central Kyiv “whinotesssia has refrained from doing so far.” pic.twitter.com/yiJ4OWlAUU

The first explosion happened at the Transneft-Druzhba Oil Depot and then a second explosion occurred at a nearby military facility around 15 minutes later, according to Russian state media on April 25. Both explosions caused significant fires.

The moment of the explosion at the fuel facility in Bryansk. https://t.co/WR8T2GqR5x pic.twitter.com/S6RZY5ZF3E

According to local reports, the Chairman of the Russian Investigative Committee, Aleksandr Bastrykin, was instructed to investigate the circumstances of the incident at the oil depot in Bryansk, where a fire broke out and fuel tanks caught fire.

Russia’s EMERCOM said that there are no casualties due to the fires in Bryansk, according to preliminary information.

ORGINAL 6.26 am (April 25) – TWO huge fires have been reported in Russia on Monday, April 25, leading to speculation that Ukraine have launched its first attacks on Vladimir Putin’s country. The fires come days after a blaze ripped through a ‘top-secret’ defence facility in the Russian city of Tver, which has reportedly killed 25 people.

Huge explosions were heard in the city of Bryansk, located 240 miles from the Russian capital of Moscow, as a fire broke out at an oil storage depot, as reported by Russian media outlet TASS.

“The Emergency Situations Ministry has confirmed there’s a fire,” the government’s press office said. “There’s also a confirmation that it’s the fuel tanks.”

According to emergency services for the Bryansk region, a message about a fire in the Fokinsky district of Bryansk was received at 2 am (Moscow time). “Fire and rescue crews were sent to the place of the call according to the increased rank (number) of the fire. Upon arrival, it was established that there was a fire on the territory of the oil depot,” the department noted.

Two huge fires in #Bryansk, #Russia. An oil depot and possibly a military facility
Tanks at an oil depot are on fire, the regional government said. pic.twitter.com/ogO0sPYQIU

A second unconfirmed fire is alleged to have broken out at a military base.

According to RT: “According to unconfirmed reports, the second source of fire originates in the area where the military unit of the 120th arsenal of the Main Missile and Artillery Directorate of the Ministry of Defense is located.”

Ukrainian officials are yet to have commented on the fires currently burning in Russia.

Earlier this month there were reports from Russia that Ukrainian helicopters had hit residential buildings and injured seven people in the area. The ‘attacks’ were believed to have been carried out in the Belgorod region, with another oil depot being targetted.

The governor of the Belgorod region, Vyacheslav Gladkov, said at the time that the cause of the fire at the oil depot in Belgorod was “an attack by two Ukrainian helicopters”, which flew at low altitude and carried out an airstrike.

However, responsibility for the fire at oil depot in Belgorod on April 1 was denied by Ukraine.

Oleksiy Danilov, secretary of Ukraine’s national security council, said on Ukrainian TV at the time: “For some reason, they say that we did it, but in fact, this does not correspond with reality.”