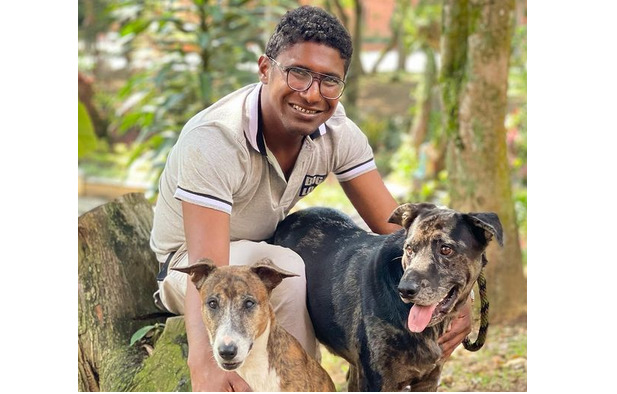 A homeless man throwing a birthday party for his dog, has his life changed forever Source: Instagram Choko

For many homeless people a dog is as the saying goes “their best friend”, and for this man his changed his life forever after he was filmed throwing his a birthday party.

Choko, who lives on the streets of Bucaramanga in Colombia, doesn’t have much but he used what he had to throw a birthday party for them, only to be filmed by a passer-by

The unnamed camera person took the video when they realised the love that Choko shared with his dogs, Shaggy and Nena. Realising that he had gone to great trouble with a cake and candles, they filmed him singing happy birthday to Shaggy and showering him with love and attention.  .

After doing some homework the person who took the video found out that he had been homeless for several years after leaving an abusive home. Touched by his care for his animals, they started to bring Choko and his two dogs food and drinks – making sure they were all well looked after.

It wasn’t long before they became somewhat of a local attraction, with people coming to get their photos taken with Choko and his two pets. His fame spread far and wide, so much so that he now has an Instagram account with 180,000 followers.

But most importantly they all now have a place to stay and he earns a living selling t-shirts, with a percentage of the sales going to local charities involved in stamping out animal abuse.

Choko has said that he would like to pursue a career in music according to Bored Panda, as well as open an animal shelter.

Those that have met Choko think that he has what it takes to achieve his dreams, with his homeless life over and he and his dogs able to celebrate next year’s birthday party in the comfort of their own home.