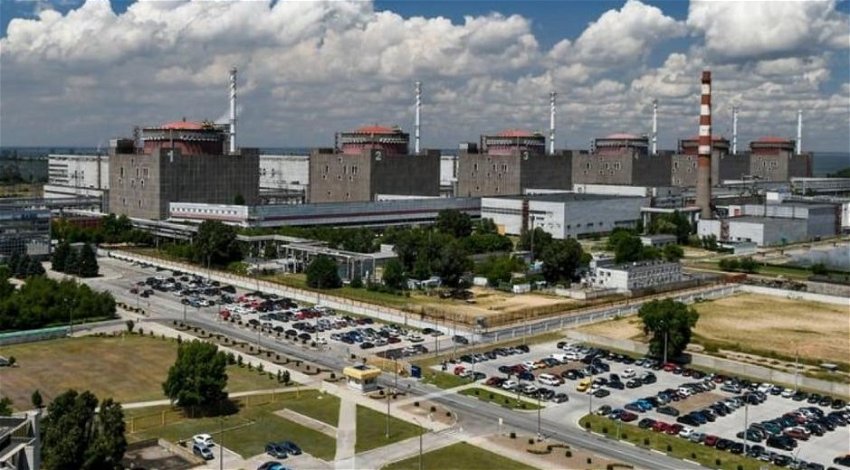 Explosions have been heard near Europe’s largest nuclear power plant as Russia continue its attack on Zaporizhzhia.

The plant was captured by Russian forces on March 4 and remains under their control.

EXPLOSIONS have been heard near Zaporizhzhia, Europe’s largest nuclear power plant, as Russia continues its attack on the region.

The head of Ukraine’s nuclear company Energoatom, Petro Kotin, said on April 26 that explosions had been heard in the city after two Russian missiles were fired over the Zaporizhzhia nuclear plant.

Kotin said: “The flight of missiles at low altitudes directly above the ZNPP site, where 7 nuclear facilities with a huge amount of nuclear material are located, poses huge risks. After all, missiles can hit one or more nuclear facilities, and this threatens a nuclear and radiation catastrophe around the world.”

A statement from Energoatom read: “Today, at 6.41 and 6.46 am, two enemy cruise missiles flew at low altitude over the Zaporizhzhya NPP site in the direction of Zaporizhia. Later, explosions from Russian cruise missiles were recorded in Zaporizhia.”

“Russia’s nuclear terrorism is on the rise, and the threat is growing. 36 years after the Chernobyl tragedy, Russia exposes the whole world to the danger of a repeat of the nuclear catastrophe!” it said,

It continued: “Russian troops are also keeping heavy equipment and ammunition directly at the ZNPP site, effectively turning the station into a military base and terrorising the station’s staff and the population of the satellite city.”

According to the regional military administration, one person was killed and one person was wounded following strikes on the missile strikes. Early reports suggest that the two Russian missiles struck a property in the city belonging to a Motor Sich production plant which apparently makes engines for the Bayraktar TB2 – a medium-altitude long-endurance unmanned combat aerial vehicle capable of remotely controlled or autonomous flight operations.

A statement from the secretary of the City Council of Zaporizhzhia, Anatolii Kurtev, has apparently asked people not to distribute photos and videos of this morning’s missile damage to Zaporizhzhia on the Internet.