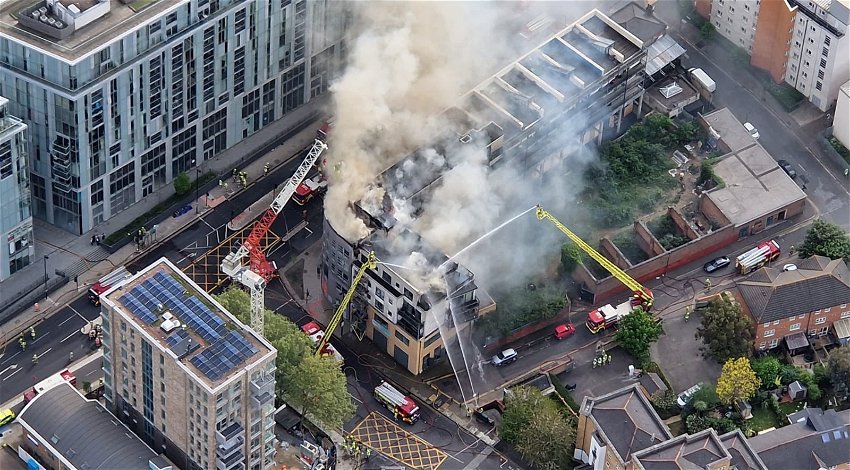 A huge fire broke out on top of a block of flats in Deptford, London earlier this afternoon, with 120 firefighters tackling the flames.

The London Fire Brigade (LFB) were called out shortly after 1pm after a huge fire broke out in Deptford, London, on the roof of a block of flats. Around 120 firefighters are reportedly battling the huge blaze with support from the National Police Air Service.

We’ve been assisting @LondonFire who have been tackling a large fire in the #Deptford area. Our overview imagery can be viewed by the #LFB in their command vehicles enabling them to be able to tackle the fire quickly and efficiently. @MPSGreenwich @MPSLewisham pic.twitter.com/IadB8Ru1Wl

@LondonFire right in the middle of it. Fire at Creek Road, Deptford, London pic.twitter.com/y9XQ2JSJeK

According to reports by the Mirror, a 26-year-old resident, who lives on the top floor of the block stated: “We were in our bedrooms and we saw smoke and could smell smoke coming in. We left it for about 10 minutes until we decided we needed to look upstairs see what they’re doing there’s contract work going on. We went upstairs and saw the fire and were like right we need to get out. We grabbed a couple of things and legged it out of the building.”

The resident stated that all of his neighbours managed to escape the burning block in Deptford, London.

FB Station Commander Ian Smith, who is at the scene, stated: “This is an intense fire located in the roof of the building and fire crews are working hard in challenging conditions. We’ve increased the number of fire engines because of the need for more firefighters in breathing apparatus. There is a lot of smoke from the incident and we’d ask local residents to close their doors and windows.”

A LFB spokesman added: “Twenty fire engines and around 120 firefighters are dealing with a fire on the roof of a block of flats on Creek Road in Deptford.

The fire has reportedly been burning for four hours, since 1.pm UK time, with no reported casualties or injured people as of yet.