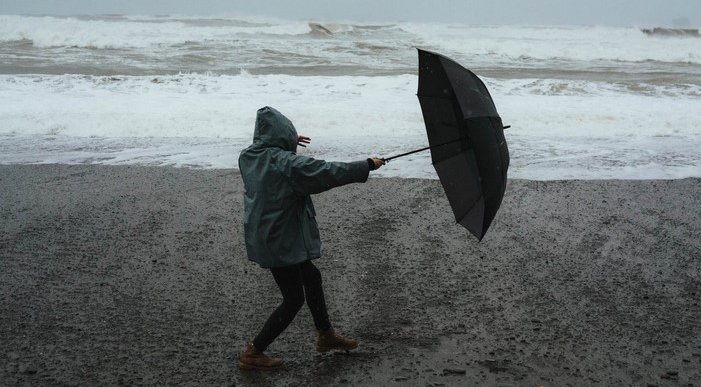 Photo of a girl on the beach with an umbrella. Credit: Pexels - Dziana Hasanbekava

AEMET, the State Meteorological Agency is predicting the return of ‘muddy rain’ caused by particles of Saharan sand

According to AEMET, the State Meteorological Agency, a band of low pressure located to the west of Galicia will bring cloudy skies this Wednesday, April 27. This will develop into rainfall and storms that will spread throughout much of the Spanish mainland and the Balearic Islands.

Specifically, in the eastern half of the country they may be locally strong, while in the southwest and northeast of the Peninsula, as well as in the Balearic Islands, they will be less likely and weaker, with cloudy intervals.

Skies will be cloudy in the north of the mountainous parts of the Canary Islands, with the rest of the archipelago experiencing slightly cloudy intervals.

Temperatures are predicted to drop throughout Spain, but should remain unchanged in the western half of Andalucia, the Pyrenees, Catalonia, the Balearic Islands, and the Canary Islands. This fall may be locally noticeable in areas of the eastern half of the country, while nocturnal temperatures will rise in the northeastern half of the peninsula.

Westerly winds will blow along the coast of Andalucia and in the eastern Cantabrian Sea, while in the Balearic Islands, they will blow from the north.

Variable light winds will predominate across the rest of the country, although somewhat more intense stormy gusts are not ruled out in some areas. In the Canary Islands, the trade winds will blow from the northeast, with some strong intervals.

Francisco Martin, the expert meteorologist at 20minutes.es warns of an”irruption of Saharan dust” that will occur in Murcia, Almeria, and Alicante between April 26 and 27. The presence of these dust particles, added to the high probability of rain, will give rise to ‘muddy rain’ throughout the southeast of the peninsula.

He was quick to point out that the situation will not be anywhere near as bad as it was in March, when the entire country was covered in dust at levels that could be considered “adverse”.